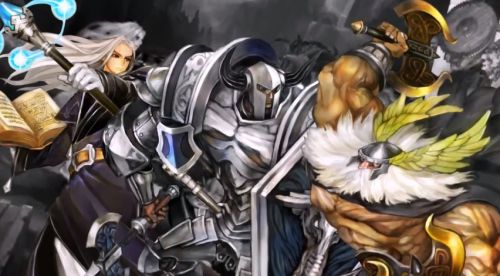 Dragons' Crown is coming to the PlayStation 3 and PlayStation Vita this summer. It's a side scrolling beat'em up/action RPG that features some intriguing hand-drawn artwork. Frank Frazetta would be proud. Once you get past the physical appearances of the Amazon and the Sorceress, there's a pretty decent looking co-op game here. In fairness to the ladies, several other creatures seem to be sans clothes, themselves. The dwarf, for example, is wearing little more than a beard, boots, and belt.

Today we have two new videos and a handful of new screens. Somehow I was able to ignore all the monster nudity and focus in on the "Red Hot 2D Multiplayer Action." Their words, not mine. Players will be able to party up with three friends and take on a wide variety of fantasy creatures. There will be quests, treasure, and XP, of course. I'm going to guess a dragon or two might make an appearance, as well. The gameplay footage comes toward the end of the video, so be patient. Or scroll to 1:10. Your call.

The magical mouse at 1:03 is clearly doing his own personal no-pants dance. That's okay. I'm not here to judge. Get down with your bad rodent self. The next trailer features even more naked monster action. It shouldn't be too much of a problem. Most of the creatures seem to lack genitals, but I didn't pause the video to check. Or did I?

Dragon's Crown supports four player local co-op and four player online co-op. It should be available on the PlayStation 3 and Vita on August 6th. If you need more of an eye full you can check out the screens below.