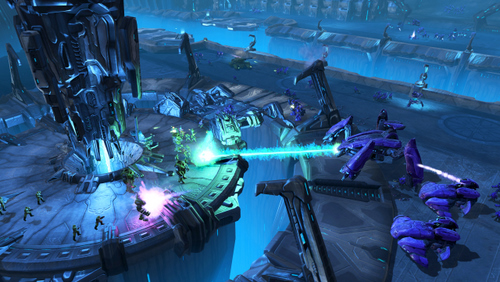 We're still trying to dig up some Halo Wars co-op info, but in the meantime we found two interesting articles out there.  The first comes from MTV Multiplayer where they interview the project's lead designer Graeme Devine.

Despite earlier reports, the Flood will NOT be playable in the game, players will merely encounter them during the course of the game.  The reason?  They played a bit too much like the Zerg from StarCraft.  With another Halo game set to come out next year, it seems a tie in would be obvious, but such is not the case.  While you will be able to build the ODST troopers in Halo Wars, that's as far as it goes.  Finally, for those of you as obsessed with the lore as I am, the game which is a prequel to the other games in the series will see some characters leaking over from the books - namely a Spartan named Alice as a hero unit.

The second article doesn't have much info in it, but it does bring up a good point in regards to the Halo games in general.

Ultimately, the licence is perhaps a curse as much as a blessing for Halo Wars. The audience definitely cares about the minutiae, but a lot of the big pieces fans love aren’t there: there’s no Master Chief or Cortana, and the game’s equivalents are slightly soulless. And, counter-intuitively, singleplayer is resolutely UNSC only.

Could this be the game's doom?  Perhaps.  There's still a lot of Halo look and feel to the game, even the music sounds eerily similar, despite not being composed by Marty O'Donnel.  And despite Ensemble being closed down after this project, they don't want to just sit back and turn in something half-assed.

That's good to hear, and probably the reason the new company a lot of these folks are forming will be directly involved with any DLC that inevitably comes for this game.