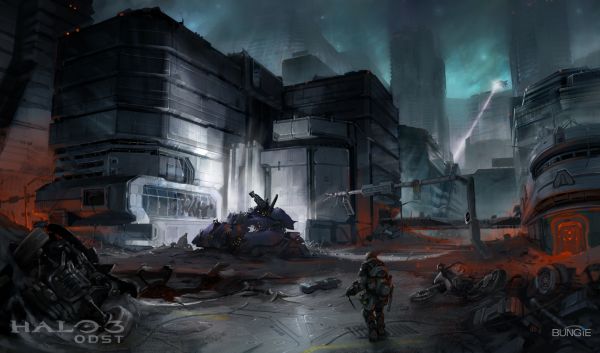 The folks at Bungie have released some concept art for their upcoming Halo 3 "sequel" called Halo 3: ODST.  The game puts players in the role of an Orbital Drop Ship Trooper, and is set between the events of Halo 2 and Halo 3.  The game is said to be darker and grittier style Halo game, but still retain that familiar Halo feel.  Whatever it is, I hope I get to shoot grunts in the head and they explode like a confetti filled balloon.   Only, instead of confetti, it's brains.

Of course the folks around here are anxious to get their hands on the four player co-op mode.  There's more concept art after the jump. The full set of concept art, including character sketches, can be found right here.