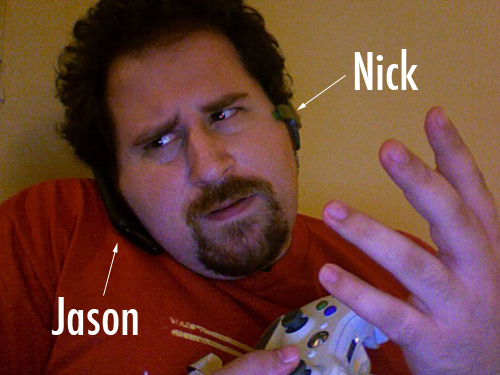 So it all started when Nick and I decided to play some Halo 3: ODST (Yes, ANOTHER ODST story) and co-op through Legendary.  Jason, having recently picked the game up, wanted to join our session, so we agreed upon a time to meet.  Our time arrived, and I partied up with Nick, set up the lobby, and threw an invite to Jason, which is where our story truly begins...

...You see, Jason recently moved and didn't have his Xbox headset at the time, so we had to rely on quick phone calls or text messages over Live to communicate. I invited him to the game. Time passed. Nick asked if Jason was coming. I figured that he was in the bathroom or otherwise away from his system, so I gave him the benefit of a few minutes.  Growing impatient, I sent another invite, at which point I received a phone call, paraphrased here:

"It says I can't connect to your game. I can join your party, though."

Now, taking a phone call when you've got a headset on already is always amusing, and this was no different- I started offering Jason some advice on router settings (he was on a new network, after all), and eventually Nick started paying attention.  We ended up having a technologically-advanced game of "telephone" going: Jason would inform me that his Xbox wasn't cooperating, I would repeat any relevant info to Nick, and so on. This went back and forth for some time, before we discovered that support for Jason's router was discontinued in 2007, agreed that some Google-fu was in order on his part, then said goodbye to him and finally started to play our Legendary campaign, with a few too many skulls turned on for good measure.

Legendary is already quite difficult, and when all your enemies are upgraded, have double the health and constantly chuck grenades while avoiding yours nearly 100% of the time, it becomes an even greater challenge.  Needless to say, our pace was slow. We reached the point in the first flashback where two Hunters are unleashed on you after battling through an arena littered with snipers. Our strategy to defeat said Hunters never worked. Our campaign score dropped by several thousand points. We grew frustrated. Finally, we decided on a winning strategy:

You know what? It worked.

Postscript: Jason eventually got Xbox Live working again, proving that life DOES give us a happy ending every once in a while.