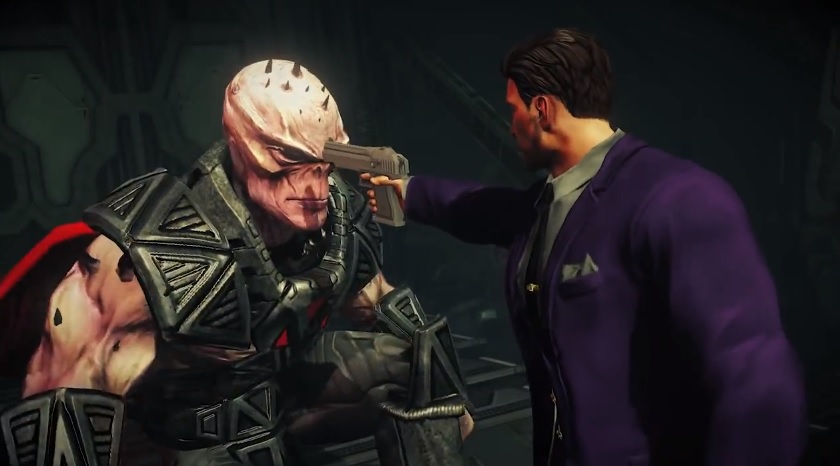 Saints Row IV is looking, well, it's looking a lot like Saints Row: The Third: -- purple-clad nonsense wrapped in explosive profanity and jubilant violence. So it's looking pretty good. DJ is hard at work on our extensive hands-on preview which will post tomorrow. I thought I'd share a video of the E3 demo to get you all in the mood. Brace yourself. There's swearing and murder and boobs, oh my.

Those super powers look niiiiiiice. It's a little unsettling to see the generic male version of the President. My Saint from SR3 was a violet-haired vixen who spoke with a Russian accent. I have every intention of recreating my character and making her the first female President of the United States. I might even put some pants on her. Probably not.

Speaking of clothing, or the lack thereof, you can get the "Iron Rogue" or "Queen Amazonia" outfits if you pre-order from specific retailers, such as Gamestop and EB Games. I'm sure we'll be overwhelmed with more DLC once the game launches, especially if it will have the massive amount of DLC SR3 brought to the digital table. On an even more trivial note, (what could be more trivial than fun pre-order bonus costumes?) Kotaku has noticed  a Steam listing for a "Low Violence" version of Saints Row 4 for potential Australian customers. Publisher Deep Silver hasn't  comment as to what's being left out, but I'm going to guess it's something incredibly high-brow and insightful, or at least damn awesome.

Saint's Row IV will support two player online co-op. It will launch on August 20th on the Xbox 360, PlayStation 3, and PC. Our hands-on preview of the latest build will post tomorrow.