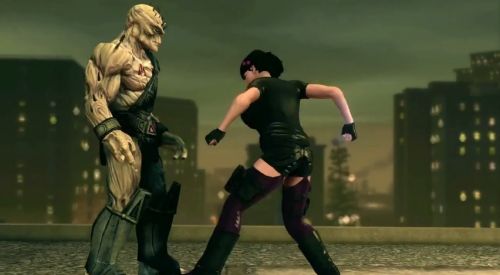 Saints Row 4 will be crotch-punching its way to store shelves this August. The follow up to 2011's unabashed depravity simulator will feature, well, a whole bunch of stuff. The reveal video has about 60 different cuts of gameplay footage, many including shots to the man region --and car chases, explosions, black-barred nudity (NOT the good kind), dancing, super powers, aliens, robots, and giant kaiju energy drinks. Just strap in and watch the video.

Yup, that looks like more Saints Row: The Third, alright. Nothing wrong with that. SRTT was a great sandbox game which was made all the more awesome when you brought a friend along for the ride. We reached out to Deep Silver to find out if Saints Row 4 would support co-op play, and they told we'll find out at PAX East, which is happening next weekend. I'm going to go out on a limb here and say it will probably support two player online co-op, at the very least. It looks like there were a few co-op dance-offs going down in that montage of debauchery. We'll update the Co-Optimus database accordingly when we get solid information.

As far as the plot is concerned, the leader of the Third Street Saints is now the President of the United States. Wait, it gets better: An alien named Zinyak invades the Earth and then tosses the Saints into a Steelport simulation which gives them super powers and access to alien weaponry. Now save the world. Sure. Why not?

Saints Row 4 will launch on August 20th in North America on Xbox 360, PlayStation 3 and PC.  The rest of the world will get it on August 23rd. I expect delightful nonsense.