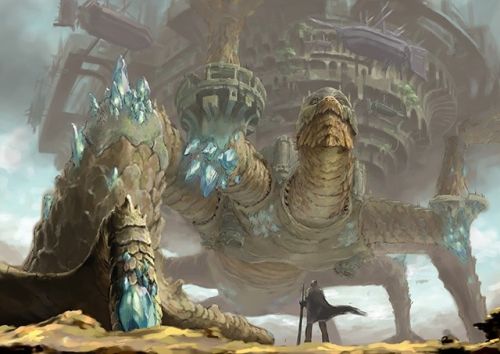 I've been in love with White Knight Chronicles since I first heard of it.  Now that the game has launched in Japan, we can read some actual, hands-on experiences from those who have played the game.  1UP's preview is especially detailed.  It appears that the main story mode, featuring the enormous robotic warrior we've seen so much of, is just half the experience.  The remainder will be the 4 player online co-op mode.  While playing online, your avatar is the main story mode's character's companion.  You have full control of creating this characters look in the robust creation tools.  All in all, the game plays much like an MMO.

After creating a lobby, you join instanced rooms for randomly generated quests that culminate in a boss battle. You avatar retains the levels, money, and items gained and brings them back to Leonard's one-player Story Part. According to the manual, it even has social networking-style functions, like a personal home page where you can link to friends, post in-game photos, and blog about your adventures. It all sounds fascinating, and I look forward to trying it...whenever Sony fixes its servers.

The game may not quite reach the level of hype in generated, but it still looks like a solid single player RPG coupled with a nice co-op experience.  We're particularly glad to see that levels, items, and such will transfer between story and co-op mode (I'm looking at you, Fable 2).  Three trailers are embedded after the break, titled "Intro", "Field Battle", and "Character Creation".