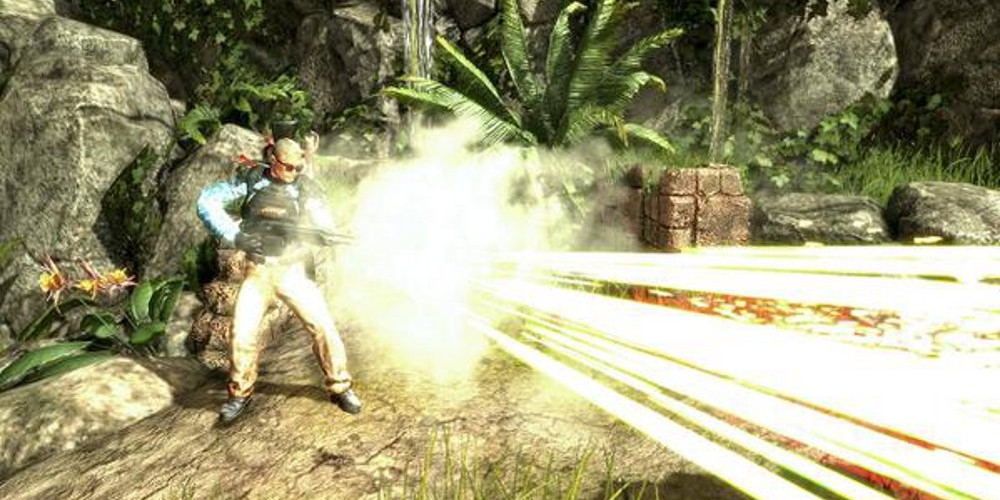 Narco Terror, the game that thinks it's cool to shoot down a submarine hatch with one gun and fire behind your back at a helicopter with the other, will hit XBLA and PSN this week!

Celebrating all things excessively explodey, Rubicon Orgnization's upcoming twin stick shooter Narco Terror is a love letter to the cheesy 80s action film. No, not love letter, that's too sappy. It's the tank filled with explosives rolling through a jungle as it fires bullets made of smaller bullets greased with the blood of its fallen enemies. Or something to that effect. Anyway, it's all action in Narco Terror, and the release date has just been mentioned at the last minute. Look for it on Xbox Live Arcade and PlayStation Network in just a few days with a rumored price of approximately 10 USD.

If for some reason you were worried about story points amongst the twin stick shoot-fest, here's something to make you less worried:

Ex-special ops Rick Quinn is a one-man-army and faces impossible odds. His beloved daughter was kidnapped by drug cartel leader Delgado, to prevent the use of a new tool that could expose the secret narcotics smuggling ring. Quinn is the deadliest weapon around, and will stop at nothing to get his daughter back.

Quinn may be a one man army, but you can bring a friend for co-op mindless shooting if you like. Narco Terror supports two players both online and locally and allows for drop-in/drop-out, just in case one of you has to go shoot a helicopter with a machine gun in real life. Hey, you never know.