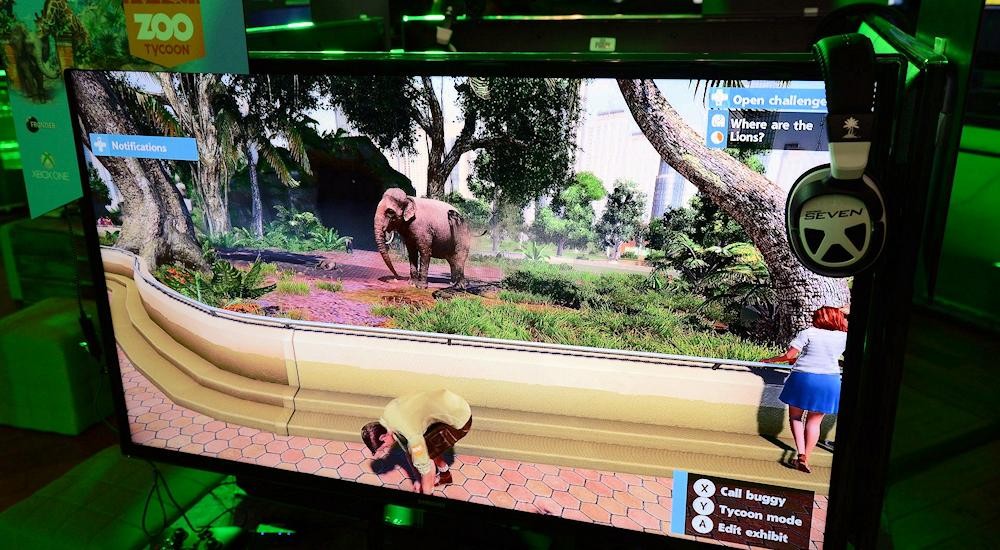 It feels weird for me to say, but the most visually impressive game we got to see on the Xbox One so far is Zoo Tycoon. That’s not a knock on the other Xbox One games, that’s simply a statement of how great Zoo Tycoon looks. Texture detail is crisp, realistic, and colorful. The character and animal models look incredibly lifelike and their animation is equally as impressive.

These simulation style games can be incredibly addictive, players become sucked into the management of their park while wanting to “collect them all.” Zoo Tycoon continues this tradition with somewhere near 100 animals available at launch for the title. Sadly there are no penguins and the team isn't ready to discuss if DLC is even going to happen. The game revolves around two modes of play. In planning and building mode you get a top down view of your zoo with the ability to add attractions, enhanced existing attractions, and look at the day to day running of your park. The game uses a pretty intuitive message system which notifies you of the wants and needs of your zoo and makes it easy to jump around and get stuff done.

The other mode puts you into the shoes of a zookeeper and lets you walk around the park seeing the fruits of your labor up close and personal. Here you can take pictures (no selfies though) and share those candid moments when the bears are humping with your friends. We don’t know if there is actual bear humping in this game, but if there is, you know what you have to do.

In terms of co-op Zoo Tycoon will allow up to four players to simulatenous build and manage a zoo at once. The zoos themselves are stored in the cloud, so players can come and go and work on a persistent zoo when their friends aren’t around. In co-op there’s not only free play modes, but challenge modes where players can work together to accomplish specific tasks and goals. While details of the challenges weren’t divulged, we hope one of them involves stopping a monkey rebellion. Players can also ride around in little buggies and compete in buggy races online.

Zoo Tycoon is set to be released around the Xbox One launch on November 22nd. This could be one of those sleeper games that no one talks about but everyone ends up playing.