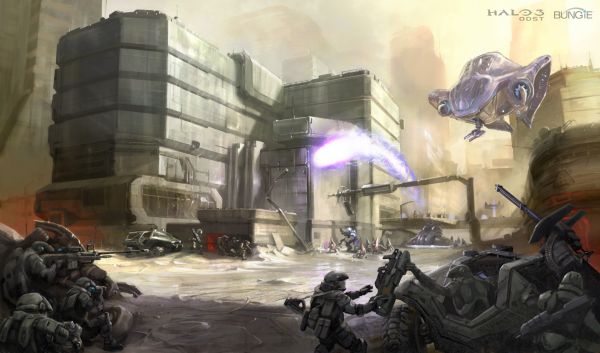 In an interview with Gamepro, Bungie's Joseph Statin talks about the upcoming Halo 3 co-op game called Halo 3: ODST.  Mr Statin spills the beans on some of the common questions to the game.  No you won't run into Master Chief.  Yes the game is going to contain it's own multiplayer modes, saved films, screenshots and more.

In the ODST you'll play the role of a Orbital Drop Shock Trooper smack at the end of Halo 2's storyline on New Mombassa.  The game is said to be more tactical in nature, requiring players to think about a situation before running and gunning in like they did with the Master Chief.  Of course this lends itself well to teamwork and cooperative play.  Thankfully the game is going to deliver with full four player co-op through the entire campaign, much like its big brother.  But will there be drop-in/drop-out?  Only time will tell and we'll keep our energy swords crossed.

Darker, grittier and more tactical - Halo 3 ODST is set to release this fall on the Xbox 360.