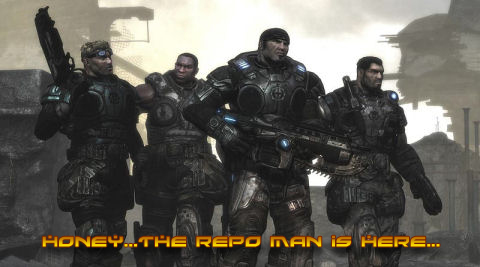 Rough economy got you down? Here's your chance to keep your money in your pocket and still acquire some new toys!

Microsoft Game Studios is running a contest wherein you can win potentially $25,000 worth of prizes (see the full list after the "Read More" link). For 13 days beginning February 1st, Gears of War 2 players can jump into a gametype that is specified on the official schedule (see also after the "Read More" link) and are automatically entered to win, provided that you have registered ahead of time, either via online registration, or by applying the free "13 Days of Gears" Gamerpic.

Thirteen Grand Prize packages will be awarded (one each day), consisting of:

In addition, five daily First Prizes will be awarded, which will include the soundtrack, novel, in-game golden weapons and a signed poster.