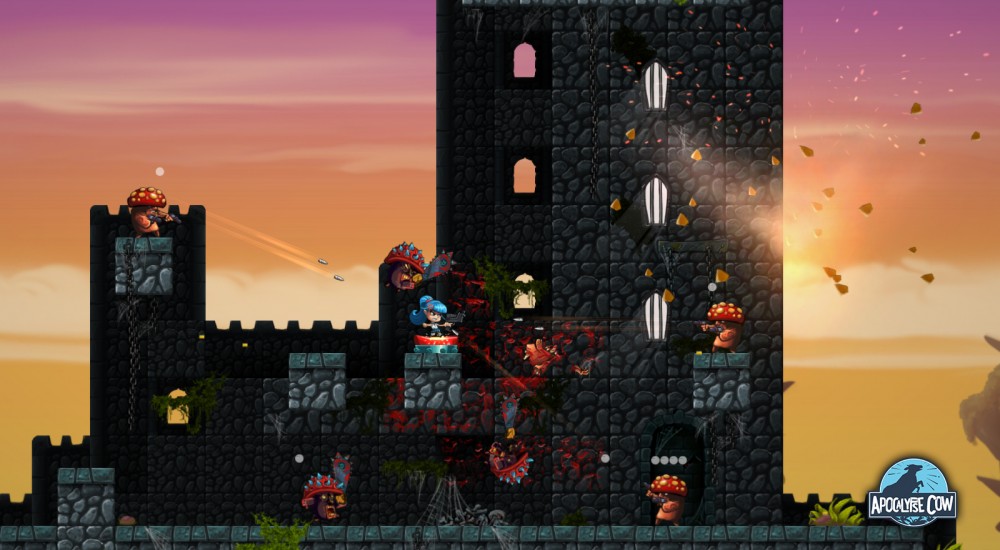 The trailer pokes at several games and movie franchises right off the bat, so you should know going into Apocalypse Cow that you won't be doing anything too serious. Yet, the state of indie games as we know it is in danger! You'll have to do something to save the (game) world!

Taking place in the future, anyone with a specific gene can enter the world of video games and movies. With all the different genres, and not to mention the class of real and fictional characters, it's pure chaos. An establishment known as SHIELDD, (Somewhat Heroic Insiders Establishing Life's Defense Department), is formed, and protagonist Penny is recruited to the group.

Monster Games aims to combine the best from your favorite games and movies and "explode them into a pool of blood and parody." The game plays as an action platformer, annihilating enemies with awesome projectiles and dodging incoming attacks and traps, all to some pretty rad music.

Monster Games confirmed that Apocalypse Cow will have 2-player local co-op, and also stated they are looking into ways to let you kill your friends in-game.

Apocalypse Cow is set to release in September on PC, and is currently on Steam Greenlight. Check out the gallery for some screens, and be sure to watch the trailer.