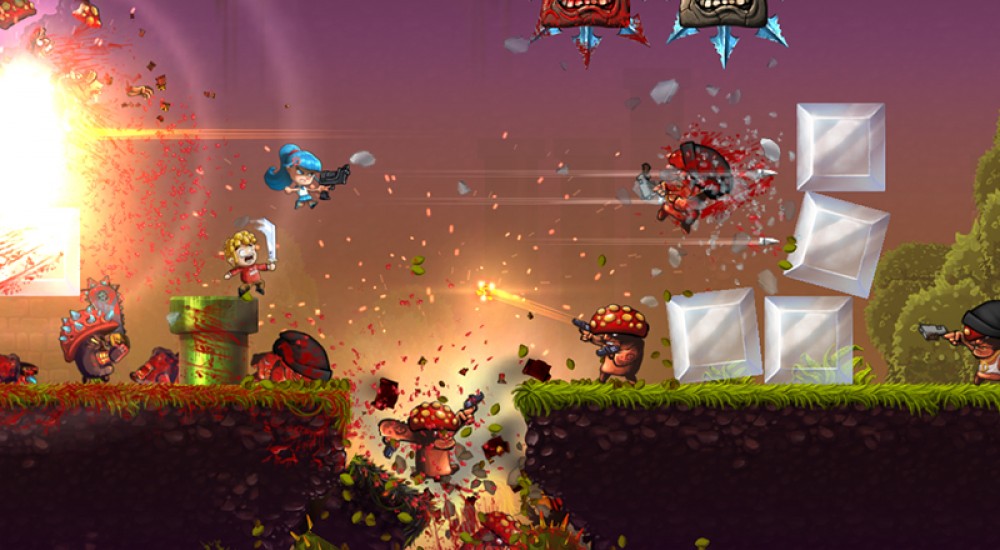 If a self-aware parody action/platformer is what you're looking for, turn thy gaze to Apocalypse Cow. It's always good to laugh at yourself, and developers Monsters have dedicated an entire title to the self-deprecation of video games. Apocalypse Cow recently marched its way through Steam's Greenlight process and is currently scheduled to go live on both PC and Mac in the first quarter of next year.

To sate your lust for bloody comedy, they've put out an exceptionally anit-Shroom trailer, and also a brief demo of the game. First, check out the trailer, and our blue-haired heroine's special time manipulation mechanic.

Unlike quite a few games with time manipulation, slowing the world down lets you jump off of currently airborne terrain as easily as stationary kind. I'm wondering what kind of crazy platforming you can engineer with some castle blocks and a few red fuel barrels.

A demo for Apocalypse Cow is currently live, and you can download it right here. This demo isn't just a snippet from the game, however. It's an entirely stand-alone level engineered to give you a feel for the game's mechanics. The demo gives an idea of what an actual AC level might be, and should last about 15 minutes. Or possibly until the end of time if you're really, really bad at it.

We'll learn more about Apocalypse Cow when it's slated for release early next year.