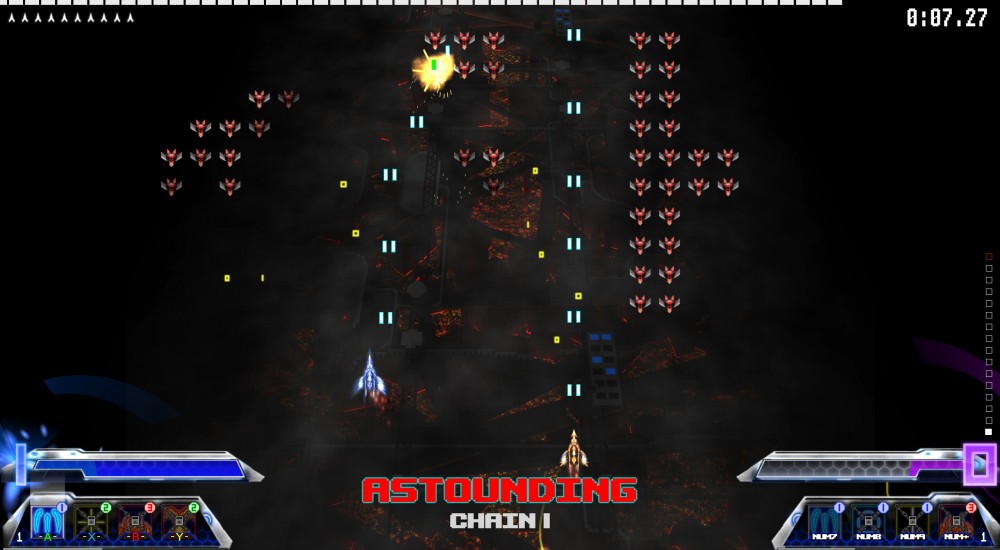 I'm a big fan of SHMUPs, especially flashy ones with slick beats. Hangeki scratches my itch in just the right places. What is it? Think of it as a cross between a typical SHMUP, Space Invaders and a splash of Arknoid.

The fast paced game is all about completing screens as fast as possible. Each screen is given a pattern of enemies of varied types. Some will shoot back, some will take extra damage, some will put out their own patterns of destruction at you.

Take down enemies, collect energy, and then unleash the Hangeki to clear the screen before moving onto the next set of baddies. You also have four equipped special weapons at your disposal like a triple shot, flame wall and several others that are upgraded during each session. These specials can be equipped before a mission and there are almost 50 to choose from bringing some variety and strategy to each level.

The visuals are simple, but flashy and the music is extremely catchy. You'll find a mission mode and several challenge levels to keep you busy. All of this can be enjoyed in two player local co-op with support for both a gamepad and keyboard to split duties. Player lives are from a shared pool and since scoring is based on time, both players contribute to the same score.