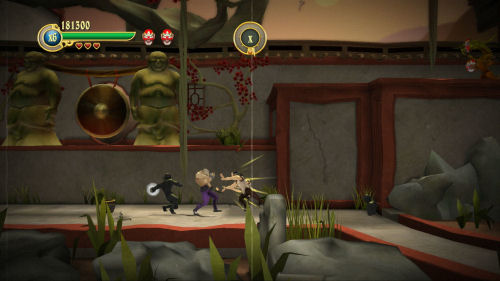 Listen up grasshopper.  Your kung-fu is weak.  But we can change that, we can make you an Invincible Tiger, an unstoppable kung-fu robot.  Namco-Bandai has announced a brand new downloadable game that looks eerily similar to Rag-Doll Kung-Fu.  It's called Invincible Tiger: The Legend of Han Tao and it features a two player co-op story mode!

Invincible Tiger has players teaming up to take down the Evil Overlord's (really..that's the best you can do for a bad guy name?) army.  Players will share a zen meter as they master their kung-fu combos and take down the bad dudes.

There's no release date set yet, but we'll let you know of any developments.  Anything with co-op and kung-fu is ok in my book.  To hold you over we've posted eight new screenshots.

Invincible Tiger: The Legend of Han Tao is being developed by Blitz Arcade, a division of Blitz Game Studios in the UK and provides engaging, over-the-top combat and multiple gameplay modes to explore alone or with friends online.

Han Tao, General of a Thousand Victories, has pledged his life to protect the legendary Star of Destiny, a mysterious artifact recently stolen by the Evil Overlord. Han Tao will face a cavalcade of enemies, ranging from standard grunts to undead horrors in his quest to recover the sacred Star. Luckily Han Tao is well versed in intense combos, slick counter-moves, the art of deadly weapons, and mystical Zen attacks.

By filling up Han Tao’s Zen Meter with punishing combos and well timed dodges, players can unlock the full potential of his true power and decimate the opposition.

Invincible Tiger: The Legend of Han Tao offers a variety of modes for both online and local play:

·         Team up with a partner and take on the Evil Overload’s diabolical army through Story Mode Co-op.

·         Carefully battle through each stage with increased difficulty and a shared Zen Meter.

·         Combat techniques learned through the single player game will serve players well as all-out brawls will leave stragglers in the dust.

·         Endurance Mode has players battling an endless stream of enemies under a specific time limit.

For more on Invincible Tiger: The Legend of Han Tao, please visit: http://www.namcobandaigames.com.