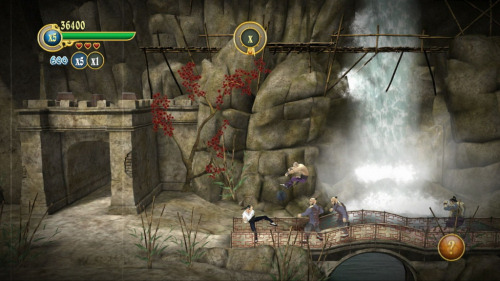 Invincible Tiger: The Legend of Han Tao was only announced last week, but that didn't stop Namco-Bandai from showing it off at this past weekend's New York Comic-Con.   While we originally thought it looked a lot like RagDoll Kung-Fu - we couldn't be more mistaken.

At its core, Invincible Tiger is a beat em up game.  Featuring 2 player co-op play through the entire campaign, players will punch, kick, and kung-fu action their way through Ninjas and other various baddies.  The whole game sports a stylized 1970's kung-fu film filter that includies film scratches and pops.  The characters may not be very detailed, but they offer a ton of little things that add to the personality of the game.  The big thing I noticed right away was the animations.  I haven't seen silky smooth animations like these since Flashback on the PC ages ago.  In fact, combined with the character style it really felt very similar in presentation.

Controlling your character felt very natural, you can punch with X and kick with Y as well as jump around.  Your attacks seem to be context sensitive, and altering your direction mid attack yields some slick transitional animations.  I never seemed to fight more than five or six opponents at a time, and the controls really helped make me feel like a kung-fu master. The game also utilizes this Yin-Yang system in which you'll build up a meter by performing successive dodges.  Once reached, you can unleash your Invincible Tiger moving faster and attacking harder.  Alternatively, if you are taking a lot of damage you can pause and meditate to gain health back.  The aforementioned dodges  come from cues when the enemy's hands and feet will blink red, giving a hint to an incoming attack.  You don't know when it will happen, but by using the right stick it will help you choose your dodge move more carefully.

To put it simply, Invincible Tiger: The Legend of Han Tao is pure kung-fu beat em up fun.  I would have loved to play some co-op on the show floor with it, but alas all that was on display was a fully functional XBLA demo.  This game could be a steal for $10 when it releases this spring on XBLA and PSN.