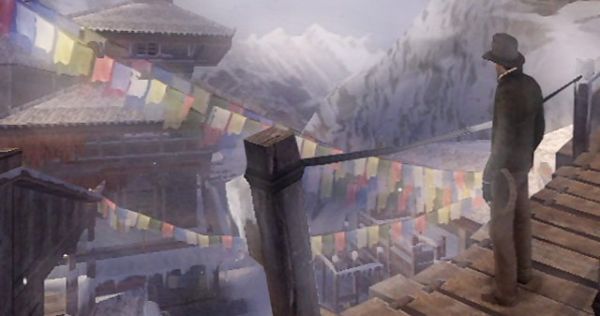 Don't take this post's title the wrong way: I've never viewed Nintendo Wii and DS owners as "casual gamers". To the contrary -- anyone dedicated enough to stand by these consoles while third-party publishers ignore them over and over again is a true gamer in my book.

When I say that Indiana Jones and the Staff of Kings is coming to casual gamers, however, I mean just that...because despite the strong license, this game just plain looks like a faceplant by LucasArts. I'm truly afraid that this game will never see mainstream acclaim.

Don't get me wrong: short of Infinity Ward's Robert Bowling, you likely won't find someone as excited about all things Indiana Jones as I am; but the price of this fanaticism is that everything associated with the beloved franchise is pored over with a skeptical eye.

Click "Read More" for the full press release, including some vague co-op info...

INDIANA JONES® AND THE STAFF OF KINGS™

Description: Step into the shoes of the legendary hero, Indiana Jones, in an all new epic adventure! Set in the year 1939, Indiana Jones® and the Staff of Kings™ follows the rogue archaeologist on an allnew globe-trotting quest.

From San Francisco’s Chinatown to the lush jungles of Panama, Indy must use his whip, fists and wits to fight through ruthless opposition as he spars with his nemesis, Magnus Völler, in a race for a relic of biblical proportions – the Staff of Moses.

Indiana Jones and the Staff of Kings features completely interactive environments, where players need to call upon their wits and daring to make each spring-loaded environment a weapon in order to dispense of foes in clever and unexpected ways. Also, embark upon thrilling action sequences that remain true to the spirit established in scenes such as Indy’s pursuit of the motorcade in Raiders of the Lost Ark, the mine-cart scene in Indiana Jones and the Temple of Doom, and the free-for-all aboard the tank in Indiana Jones and the Last Crusade.

Product Information
- Wield your Wii Remote™ like Indy’s signature whip for a variety of uses – from
combat to navigation to puzzle-solving.
- Use your highly interactive Hot Set™ environments and your wits to defeat your
enemies.
- Explore exotic locations around the globe in an all-new story that puts you on an epic
quest for the Staff of Moses.
- Apply your smarts to navigate Indy through challenging terrains with the many
maneuvers Indy can do with his whip.
- Engage in burst gunplay moments and use careful aim and the environment to take out
enemies.
- Face overwhelming odds and escape signature run-for-your-life moments, like a daring
escape from a collapsing temple, by matching fast-paced onscreen gesture prompts.
- Experience thrilling chases and control vehicles – fly a biplane in a canyon trench, take
the reigns of a wild elephant through the streets of Istanbul and navigate a raft down a
raging river.
- Cooperative gameplay mode allows you and a friend to brave the challenges in a
variety of game modes in an entirely new quest with a familiar character never playable
before in an Indy game.
- Unlock four-player versus mode where you and your friends go head-to-head in a real
biplane combat or take on three of your friends in a free for all tank battle!
- Whether you are brawling baddies or wielding your whip, use the Wii Remote and
Nunchuk™ as nature intended with the intuitive gesture-based combat system.
- Discover more than 20 artifacts and rewarding unlockables throughout the game.
- For those old-school gamers there is nothing better than unlocking the classic Indiana
Jones and the Fate of Atlantis game!
- On the Nintendo DS, use the stylus as the whip to swing over pits, brawl with enemies
and to explore the world.
-The PSP® (PlayStation®Portable) system version features six robust types of burst
gameplay including combat and physics challenges, puzzles and the trademark Indiana
Jones chase sequences.

The Fate of Atlantis inclusion is a nice touch, one that other developers should take heed of. LucasArts has always promoted classic game easter eggs (see: Rogue Squadron II: Rogue Leader).

We'll keep an eye out and make sure to bring you any new developments. Until then, chalk this one up as a rainy-day casual title with the potential to be better than this bitter fanboy expects.