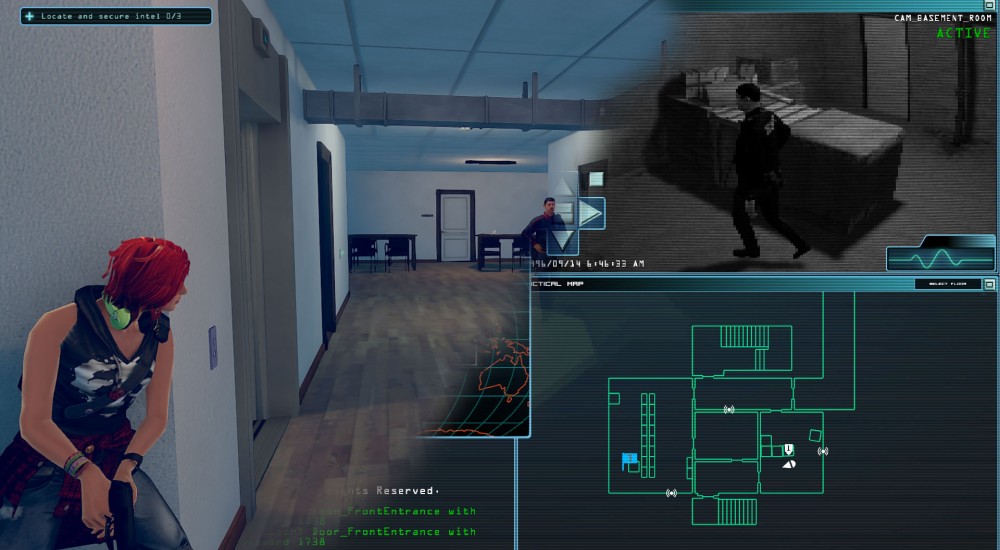 We had a chance to sit down with Alex Mintsioulis of Logic Artists, the team behind the 90’s inspired spy action game Clandestine. After an extended preview play session it was apparent they were doing something very different with the co-op. Part stealth, part hacking, partners must work together in their separate roles in order to uncover a conspiracy.

Coming off of Expeditions Conquistador, Logic Artists have turned their attention from tactical RPG to an asymmetrical co-op spy thriller. Clandestine is a step in a totally different direction and they ensured me the whole team is excited for what they have built. After a year of development and now in Steam Early Access, there is something really interesting going for Clandestine and it has to do with the fact that we haven’t seen co-op of this nature for quite some time. There are very few co-op games where both players have separate abilities and are vital for success. Discounting BYOB co-op (Mario Galaxy, Deathspank, Binding of Isaac: Rebirth) the only recent example of this co-op style is Sniper Elite 3, where one player is the spotter and their partner is a sniper. With Clandestine the co-op is almost like each partner is playing a separate game and both roles offer something exciting. Check out the video of our Smash and Grab mission as the spy:

Hopping over to the hacker seat, it was a total change of pace when you are put behind the keyboard. The hacker (codename: Symbiote) is the operator, the code junkie, the support behind the screen in Clandestine. The role of the hacker places you behind a terminal, looking over multiple 2D screens with access to a network of cameras, doors, alarms, and computers. Each window in the hacker’s view takes up a quarter of the screen and it is up to you as a player to manage all of the things happening on screen while trying to help the spy as much as possible. This can be anything from hacking cameras and marking patrolling guards to digging through employee emails for compromised security assets. It is less action-oriented play style but is it by no means boring, especially since the build of the game we played didn’t have the evil ADMIN program trying to stop our hacking efforts. With both players doing very different things, a mission plays out like a dance. A back and forth of coordinated actions are necessary to sneak into high security buildings, take what you need, and leave without a trace. Since the story missions are still being implemented, the challenge level we played was a “Smash and Grab”. Our job was to search for as much intel as possible in a large corporate building and get out without dying. The level environment was pre-determined, but everything within is random; from the guards to the cameras and the intel scattered about the office. The more intel you collect, the better your paycheck. A better paycheck means better equipment, so don’t worry there is a carrot on the end of the stick for players to chase. Another feature that Clandestine brings to the table is their metagame. As you progress through a mission, every piece of traceable action or evidence is logged. Bullet holes in walls, bodies scattered in washrooms, even viruses uploaded to the network will all be tracked. At the end of a mission a ‘footprint’ score is given which corresponds to how much disturbance you caused. This footprint builds up over time and brings consequences to the, shall we say, less subtle spy/hacker teams. If you want things to go smoothly, try and be as stealthy as possible throughout Clandestine.

Logic Artists are also toying with the idea of not having random matchmaking. In the past, developers have taken some flak in forcing people to find friends to play with instead of grouping random strangers together; simply look at Destiny’s raid system. We can respect this choice as a game like Clandestine requires precise communication and tactics because without it, the experience falls apart. Even though Clandestine can be played by yourself, switching back and forth between the spy and hacker, the right way to play will be with a buddy who has your back. Clandestine has around 3-6 months left in the hopper and is available now on Steam Early Access at a discounted price. The story missions won’t hit until close to the release date, as Logic Artists want to keep this experience for the final product. There are four challenge missions available and a community hub where you can discuss the game with the developers. They want the community to be involved with the process:

With our last game, Expeditions: Conquistador, we built up a great rapport with our fans, both on our own forums and on the Steam forums, where members of our development team have been very active. As a 12-man studio, we don't have a PR team to separate the developers from the fans, so expect plenty of direct interaction between the community and the team.

Get in there and give them some feedback, check out Clandestine on Steam Early Access here.