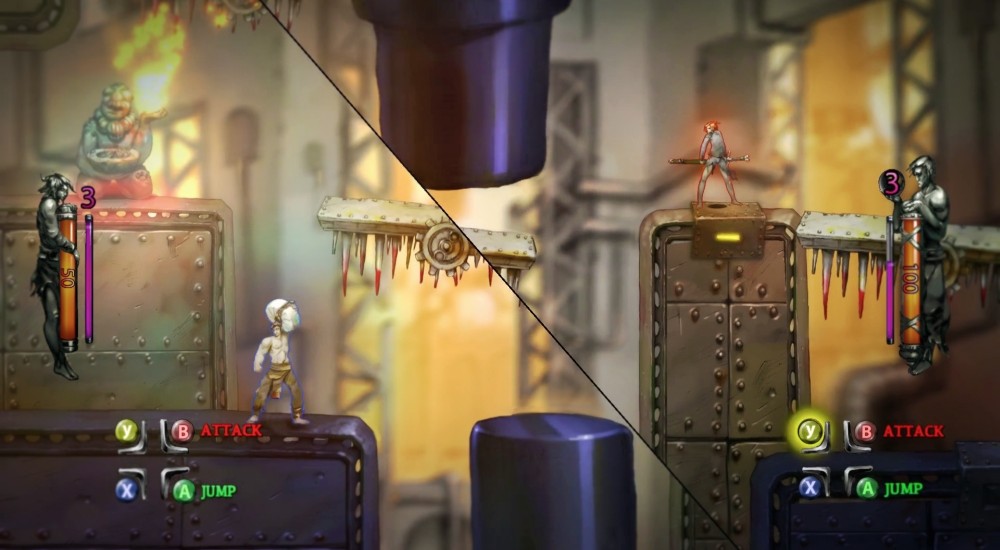 Have you ever thought the metroidvania "genre" needed to be a little more cooperative in nature? Uniworlds Game Studios has heard your cries in the dark and is getting ready to deliver. TRISTOY is coming to PC via Steam in mid-January. Not only does it have a two player co-op mode, but it requires it.

It's pretty daring to release a game that doesn't have a single player mode, but TRISTOY looks like it might pull it off. The game is set in Tristoy, an ancient fortress in the Sea of Shards. You and your local (or online) buddy play as Prince Freedan and the Wizard Stayn as they escape the dungeon. Traps, puzzles and enemies lie between them and their common enemy, Witch Ink, but since you have the power of magical friendship (not the characters, you and your co-op friend), you can totally win. TRISTOY utilizes a crazy cool dynamic split screen mechanic that simply has to be seen. Playing a local co-op game means you have to share your monitor with your friend. Instead of dividing the rectangle through the middle, the viewpoint tilts, sways and moves to show each character exactly what they need to see.

The co-op, the metroidvania and the dynamic split screen are really just icing on the cake. TRISTOY is filled with twisted artwork, painfully brutal enemies, and plenty of story points to keep you engrossed in the tale. If online co-op can produce a seamless experience, this might be just the metroidvania you're looking for. Keep an eye out for TRISTOY coming January 15th to Steam.