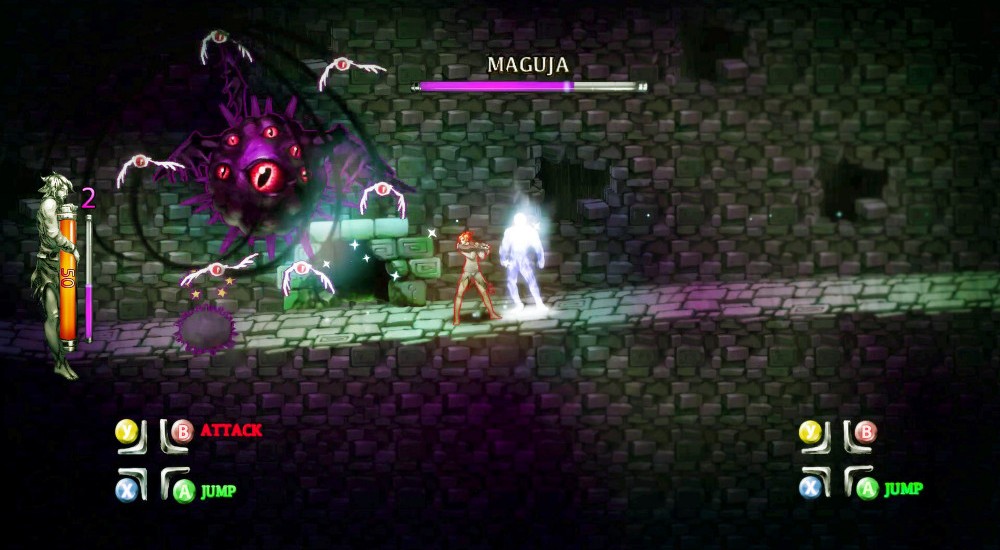 And... it's... out! TRISTOY caught our attention when it promised a metroidvania experience that was not only steeped in story but also exclusively co-op. No solo play, just you and a local or online friend solving puzzles and exploring a twisted world of danger.

Here's the set-up: you and your friend play as Prince Freedan and Wizard Stayn, two characters who are trapped in an ancient forest in the middle of the Sea of Shards. They escape from the dungeon and, logically, want to get out. That's where insane traps and bloodthirsty monsters come into play. The dungeon's twisted passageways mean you'll do a lot of exploration, and as a team, you'll help each other out of a lot of binds.

Apart from the "co-op metroidvania" phrase, TRISTOY's most attention-getting out of the box feature is its dynamic split screen. Playing co-op game means you have to share your monitor with your friend. Instead of dividing the rectangle through the middle, the viewpoint tilts, sways and moves to show each character exactly what they need to see. It looks strange in screenshots, sounds like it could be frustrating, but in practice it does exactly what you want it to do.

Grab TRISTOY during release week for a tasty 25% off. It requires two people to play and supports both online and local co-op.