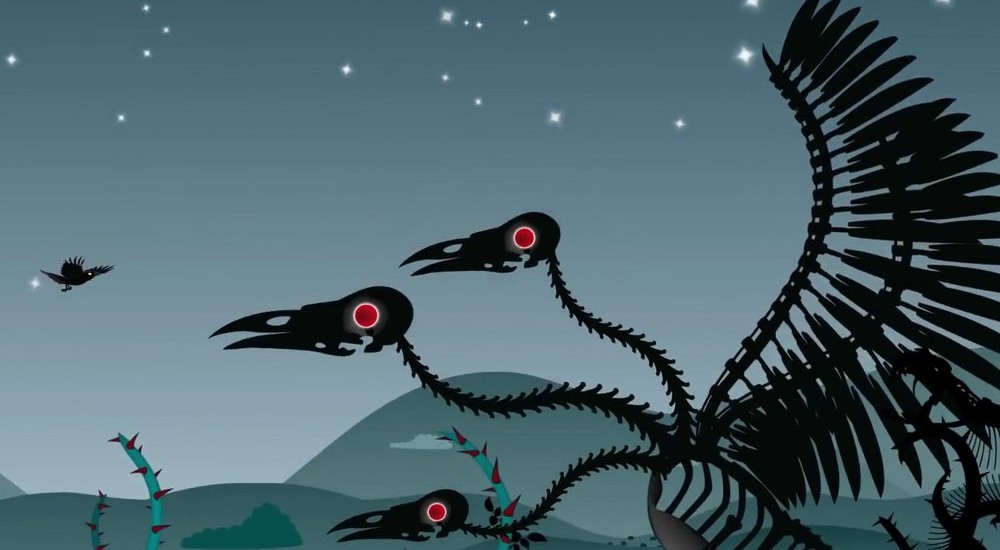 Here's what you need in your life: a game about crows. The recently-Greenlit couch co-op game A Quiver of Crows is a twin stick shooter of a different sort. Instead of mowing through alien ships, Nazis or whatever else the kids fire at these days, you play as a crow fighting against evil ghouls from the netherworld.

Did we mention the crow has lasers? Yeah, it does. And other weapons, too, like spread shots and stuff, all of which are upgradeable, just like any standard shooter on the market. You even get things like bombs and shields, which aren't normally found in a crow's arsenal. Enemies hunt you down instead of following pre-set patterns, and the world is made of flesh, bone and dirt instead of rigid objects. That's creepy, but kinda cool.

Co-op allows a second local player to grab a gamepad/keyboard and join in the crow-laser fun. And from the looks of it, there's plenty of fun to be had. A Quiver of Crows features some striking artwork that utilizes a lot of shadow-on-color stages, giving the enemies an otherworldly look that perfectly compliments their, well, demonic otherworldliness. Just... just look at that multi-headed skeleton bird beast up there, will you?

A Quiver of Crows has been Greenlit and will be released for PC, Mac and Linux.