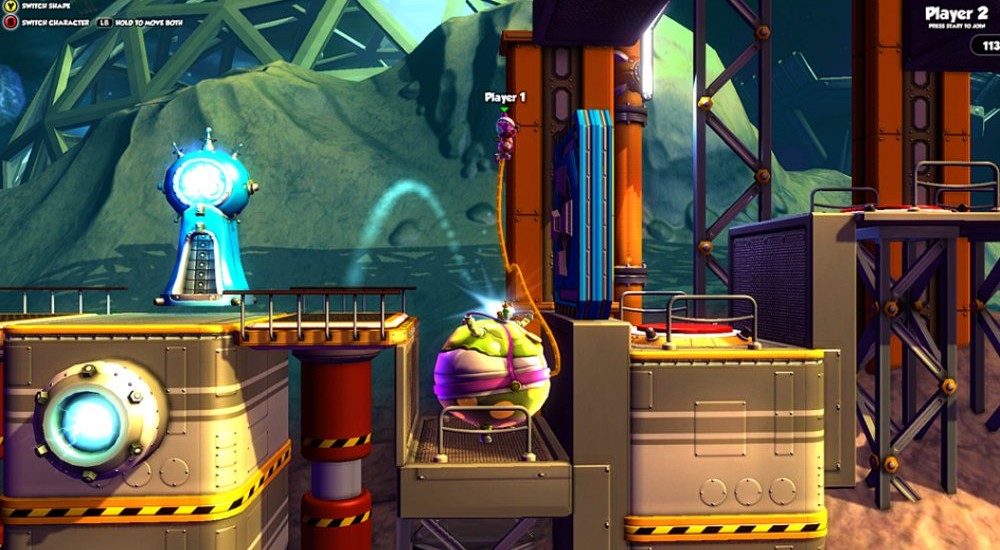 Nothing says co-op like being tied to your partner with an air hose. Shiftlings by Rock Pocket Games is a puzzle game that's on its way to consoles and PC this spring. The general idea is that you're bound to your buddy by an umbilicus that allows the two of you to pass gas back and forth. Giggle a bit, then read on to learn why that's awesome.

The premise behind Shiftlings is you're on an intergalactic reality show and are basically just traveling around completing tasks so people can watch you and go "ooh". Pushing gas back and forth in that tube allows the dim-witted space custodians to change size, one growing big and getting heavy while the other stays normal. The big 'un won't be very mobile during this time, but he can use his size to his advantage, shoving heavy things around and interacting with bits of the crazy space environment that being small just doesn't allow one to do. Puzzles stretch out across 50 levels and five different environments, all of which are perfectly suited for both local and online co-op for two players.

Early impressions of the impending Q2 PC, Xbox One and PS4 game pin it as the crazy sort of co-op fun that has players yelling at each other for not being fast/smart enough. So, the usual puzzle co-op expeerience, pretty much. Between the bright visuals and the already insane premise, we're guessing this one's going to be great loads of fun. Sorry, space fun.