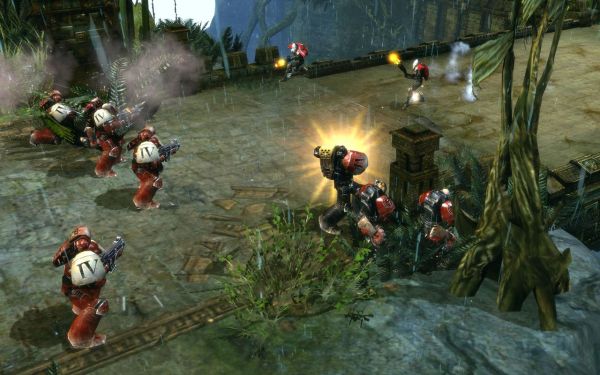 First up is Kotaku, which gets their hands down and dirty with the cooperative mode.  They quickly learned, that like any co-op game, teamwork and communication are crucial.

The impression I get from the two levels of co-op I played tells me that communication is crucial. There's no intuitive role for a player to have because we no longer have positions for babysitting the base or scouting out resource points. Without talking to your buddy to decide who's packing healing abilities and which way you plan on going in a map, things could fall apart pretty quickly if an enemy force cuts between you. Seems you'll be using DoWII voice chat for more than just trash-talking.

They do have some quarrels, namely, that seasoned RTS vets might feel a bit ripped off since the game's single player and co-op modes are so action focused. Next up is Shacknews who also got to play with a member of the development team.  Relic - remember - we're the site that does the co-op thing.

Shack was particularly impressed with just how easy it is to drop-in and drop-out of the co-op mode.  With each player controlling two squads each led by a hero, they begun to get attached to their little character.

Statistic points--earned by leveling up in battle, or by accumulating residual experience out of battle--directly unlock new abilities. Weapons and armor--found on the battlefield or earned from completing missions--are slotted onto characters in World of Warcraft fashion. Co-op players will have the ability to choose their unit types, load out their squads and level up their commanders simultaneously.

These RPG elements do more for the campaign than I first expected. In my playthrough of several missions, I was more than eager to earn rewards and random weapon pick-ups for my captains. You grow attached to these commanders in the same way you would a character in any other well-executed action-RPG. You want to beat that next level; you want to outfit your dude with that two-handed skullcrusher.

Yes, I'd like the two-handed skullcrusher and a side of bacon please.  The more I read about this game, the more I know this is exactly what I always wanted in an RTS.  There's no resource management, there's no extensive base building.  In fact, this game may share more in common with Rainbow Six than Red Alert.

And as simple as the gameplay may seem in a screenshot, figuring out how to crack a specific tactical scenario with another teammate is no easy task. On only the third level of difficulty, my co-op buddy, a Relic associate producer, was having to resort to some pretty unorthodox strategies to push us along. Pincer movements, heroic charges, artillery blasts--all have to be coordinated on the fly to avoid total decimation.

It may not feel much like a standard RTS, but whatever it is, it's a lot of fun.

Is it February 19th yet?