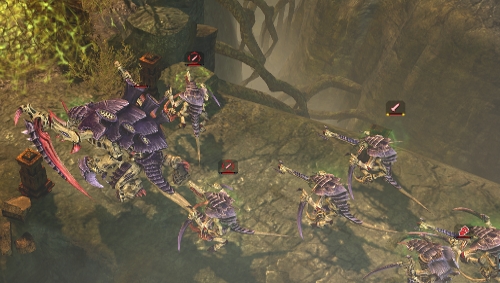 The first major expansion to Dawn of War 2, Chaos Rising, is just around the corner so now seemed like a good time to hop back into the original as a bit of a refresher and to spend some more quality time with a game that I’ve thoroughly enjoyed.  I saw that Jackel was looking for someone to co-op with and thought, “Perfect! What better way to hop back in than through co-op?”  It certainly turned out to be an interesting trip back to Calderis, Typhon, and the Angel Forge.

As a gamer, I’m not one that typically goes in for the harder difficulty levels on games, except in a few rare circumstances when I really like the game and I’m looking for a bit more of a challenge.  Dawn of War 2 is a game that I’ve thoroughly enjoyed at the Sergeant difficulty level, started a campaign on the Captain level as it seemed to be just the right challenge level, and considered Primarch as a “well, maybe if I ever get really bored.”  Well, Jackel moved that timetable up some as he’s currently going through a Primarch campaign and I thought, “Well surely it can’t be that bad if we’re playing it co-op?”

We landed in the heart of Calderis, which was already in the grips of the Tyranid invasion.  I was in charge of Tarkus and Avitus (aka, mobile artillery platform), and Jackel was controlling the Force Commander and Cyrus.

Me: Cyrus?? You sure?
Jackel: Trust me, he’s indispensable on these missions.

A fact I learned first hand all too quickly.  As we began advancing towards our target, we encountered a small group of Tyranids; a few Termagants and some Hormagaunts being lead by a Warrior - nothing we couldn’t handle.  Jackel had Cyrus snipe the Warrior, causing chaos amongst the Termagants and Hormagaunts, while Avitus laid down some suppressing fire and Tarkus provided supporting fire while the Force Commander charged in.  No big deal, right?  Such thinking unfortunately lead me into a false sense of security. Now, in order to accurately portray this next part, I should tell you that the edge of my view screen was lined up with the bulk of the Tyranid forces.  The Commander was just going off-screen when I heard Jackel say something to the effect of “oh, shoot” and suddenly I see the Force Commander fleeing past my units.  I thought maybe his health had gotten low, but before I could even ask, a Carnifex came lumbering towards my units.  My mind, still in the thralls of playing on easier modes, figured, “I’ll just chuck a grenade at it and slowly retreat.”  Before the grenade even landed, Avitus was dead and Tarkus’ squad was wondering why their commander was such a bonehead.  Having gotten out its initial aggression, the Carnifex withdrew and Cyrus snuck up to begin reviving my fallen squads.

Me: I take back all the bad things I’ve ever said about Cyrus.
Jackel: Told you he was indispensable.

We eventually managed to bring down the Carnifex (it involved Avitus running around a bunch, keeping its attention, while others shot at it) and went on to clear the mission with only a few other bumps along the way.  Since then we’ve gone on to clear more missions with all but one ending in victory.  While Primarch is proving to be more of a challenge than even I thought it would be, I have to admit that it still feels remarkably well-balanced and imbues the game with more of a “you’re just 4 squads facing impossible odds” feeling than the other difficulty levels.  One’s thing for certain, I’ve learned a very valuable lesson that I’m sure will carry through to Chaos Rising.  Namely, when you see a Carnifex coming at you, you don’t have to run faster than the Carnifex, just the Space Marine next to you.