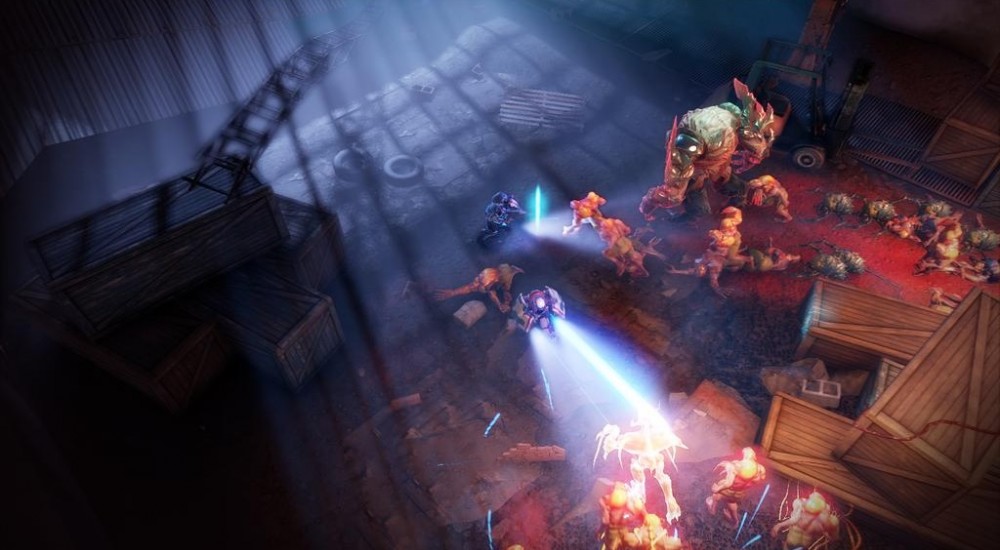 Developer Housemarque is gearing up to drop another PS4 exclusive. The makers of Dead Nation and Resogun have their sights set on an extraterrestrial menace in Alienation.

I feel it's important to clarify that I'll be discussing the cooperative twin-stick shooter, Alienation, and not TV series/movie, Alien Nation. Try getting that scene out of your head when you're 10.

Alienation is it's own animal, and by that I mean it's basically Dead Nation with aliens. Twin-stick. Shooting. Top-down. Co-op. Aliens. You get it. But if you don't get it you can check out this pre-alpha footage of three player cooperative action:

Here's a trailer viewing tip: turn off the music and watch it again. Notice how you can actually tell what's going on without getting a headache. You're welcome.

Yup. It looks like a twin-stick shooter. Players will be able to choose between three different classes and customize character loadouts. The developer themselves are referring to Alienation as a "spiritual successor" to Dead Nation, which is a good thing.

While this new trailer looks promising, especially for a pre-alpha build, it doesn't have the same chutzpah as the reveal trailer from last summer:

Boy, that looks cool. Of course, only an idiot would expect a game to look anything like it does in it's reveal trailer, right?

According to Housemarque's Twitter account, there is no friendly fire but the adversarial element is still in play. How much it will impact the co-op experience is still unknown.

Alienation will support four player co-op and is scheduled for a "future" release. I haven't nailed down if the co-op will be online, local, or combo, but judging from the pre-alpha footage it at least has online play. (The camera remains centered on one character and other players leave the screen entirely at times. That's usually a pretty good indicator some network stuff is going down.) I'll update the database as we get more concrete information.

Update: Housemarque has stated that they are focusing on online co-op for now, due to "gameplay reasons." As to what those reasons might be, we'll have to wait for more information.