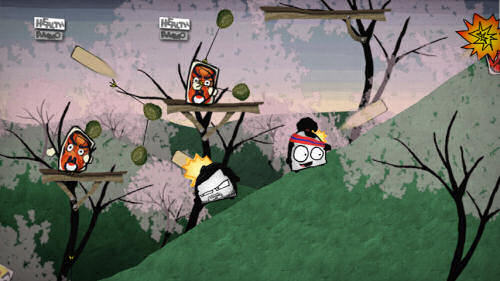 Everyone appreciates the value of a good, reliable breakfast appliance.  And of course, samurai are totally awesome, too; just go watch this sometime if you don't believe me.  Putting Samurai and toasters together seeems brilliant, and when you add in the cool art style and, most importantly, co-op, you get a package that is hard to resist.

Ars Technica recently sat down with the developers of that odd mashup, Eduardo the Samurai Toaster, recently released on Nintendo's WiiWare service.  It's an interesting read, for sure, and they even have a bit to say about the co-op.

By having Eduardo on the Wii, Semnat was also able to emphasize one of the more important aspects of the game: the co-op. "Having a multiplayer mode where fooling around and allowing people to have as much fun in the levels and with each other seems like a good idea for the console," he said. "We always wanted to do co-op but were never able to until we started work on the Wii game."

I agree with these guys!  Co-op is a great way to get the more casual folks involved in more traditional games.  Hey, don't we have a column dedicated to that?