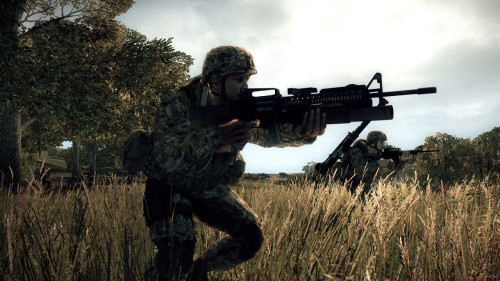 Operation Flashpoint: Dragon Rising is the sequel to a classic PC title from developer Codemasters.   The game is going to feature an epic, non linear, single and multiplayer campaign.  It's unclear yet just how many co-op players will be able to play in this realistic military shooter.

The game takes place on the island of Skira, located off the eastern coast of Russia, north of Japan.  There's 220 square kilometers of realistically modeled terrain here for players to work through.  One of the coolest features the game is going to offer is that each mission's outcome will affect another mission.  What do I mean?

Say there's a bonus objective in a mission to destroy some artillery while doing recon on an enemy camp.  If you decide to take out the artillery, you next mission might be slightly easier.  But if you leave it you may find yourself coming under artillery fire.

The game promises plenty of realistic and high tech military weapons and vehicles, all usable by the player.  Look for this game on the Xbox 360, PlayStation 3 and PC this summer.