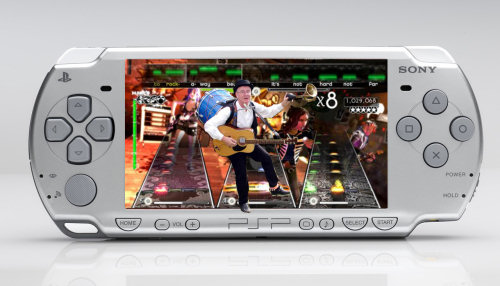 Ever have that fantasy of being in a band...alone? I certainly haven't. So, why then, would Backbone entertainment decide to take the 'band' out of Rock Band in their attempt to recreate the popular party game on the PSP? Rock Band: Unplugged seems to be just that, unplugged.  That's right, no co-op whatsoever.

Take your guitar and replace it with the triangle button, take vocals and press "O, o, eee, oh", Bass is hip to be a square, X marks the spot for the drums, and voila, instant band!

Okay, maybe this is a bit of an exaggeration. Apparently, there will be a way to switch between each of the instruments, and play their part with mad button skillz. But really, how can you fit an entire rock band on your PSP? I personally don't see it going well without utilizing that wi-fi or networking feature that Sony occasionally seems to forget about.

Maybe for this one, unless you really dig jamming on the drums with no vocals, bass, or guitar to back you up, you'd probably be better of rocking out with an air guitar in front of a mirror in your underwear. At least that's free, and would make a better Youtube video.