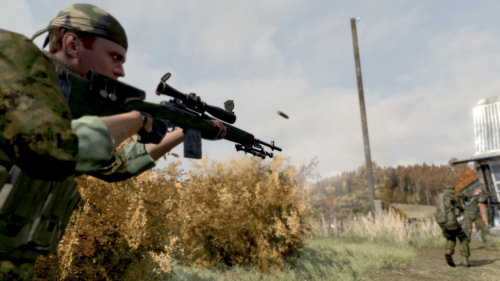 “Since Codemasters has no right to use the Bohemia Interactive game engine or any other component of the Bohemia-developed game, how can it rightfully claim to produce a ‘sequel’?”

This is what CEO Marek Spanel of Bohemia Interactive -- the original Operation Flashpoint developer -- had to say about Codemasters' recent claim that a "sequel" is in the works. Indeed, Operation Flashpoint 2: Dragon Rising is slated for "Summer 2009" according to the official website (and is rumored to feature 4-player co-op throughout the campaign), but Spanel will have none of it.

You see, Bohemia and Codemasters split up after the success of Operation Flashpoint. And while the former kept the in-game assets...the latter kept the rights to the name.

“We can’t stop Codemasters from releasing a game using the words ‘Operation Flashpoint,’” acknowledged Spanel.  “But it is not right to promote this game as the ‘official sequel to the multi-award winning Operation Flashpoint: Cold War Crisis’ or the ‘return’ of Bohemia Interactive’s ‘genre-defining military conflict simulator.’ The awards were given for the game created by Bohemia Interactive - not to a name.”

While I sympathize with Mr. Spanel, Codemasters is just employing the usual marketing, and to be honest, I can't disagree with their statements until I've played the game. A deal is a deal, and why shouldn't the publisher use the name that they obviously bought in order to promote a game that they feel is worthy of the attention of war sim fans?

Nonetheless, Bohemia Interactive's rep is on the war path. I'm hoping that his passion translates to ArmA 2, the OF2 competitor that his co-workers are currently grinding away at...

Legal jargon and moral compasses aside, I'm excited for the potential of both games. Check out the latest Operation Flashpoint 2 trailer and interview below, and then take a look at our new gallery of ArmA 2 screenshots -- procured this morning.