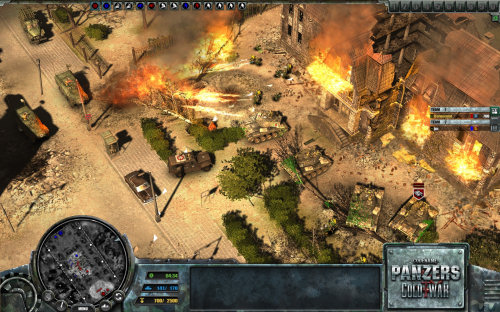 While a lot of folks are stale on the whole World War II genre of game, plenty of developers are trying to mix things up with alternate history scenarios.  Codename Panzers: Cold War, the third in the series, is doing just that on the PC.  Players take control of squads in this RTS game in a history where Soviet and US forces collide in an epic battle.

The game features two player co-op missions that are playable online.  These missions are described as "extremely difficult" and are promised to almost require cooperative teamwork to win.  One mission is described as an Alamo style holdout, while another has players working to take an atomic bomb facility - but if you don't hurry you may get nuked!

Gameplay looks similar to a Company of Heroes game, where the focus is on the action and not the resource management.  This is a trend we've been seeing in many RTS games - one that I like very much!

Codename Panzers: Cold War is set to be released on the PC on March 10th.  We've posted an impressive looking trailer and several screenshots right ahead.