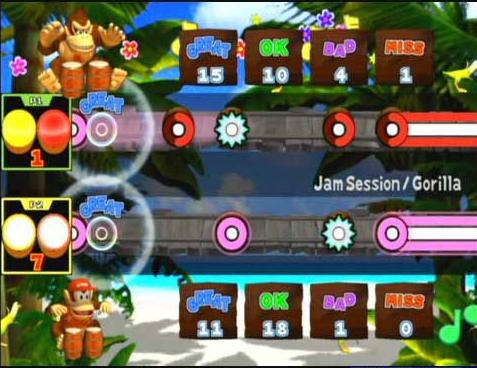 Rhythm games are among the best for a non-traditional gamer to pick up and play.  Guitar Hero and Rock Band have certainly proved this to be true.  It's hard to imagine, but there were music games before Guitar Hero, and we'll be talking about one fine example of these games today.  Grab a bongo drum controller, and let's check out Donkey Konga.

Donkey Konga was released in 2004.  That's the Mesozoic Age as far as music and rhythm games are concerned.  The gameplay elements and the controller itself are very simple, especially when compared to modern titles.  You might think this would make the game less appealing.  However, when it comes to getting casual players, or even non-gamers, involved, Donkey Konga is still the game to beat (pun intended).

Consider the Donkey Konga peripheral, the DK Bongos.  Two barrel shaped bongo drums, a few buttons, and a controller plug are all there is to it.  There are no drum sticks, fret buttons, or anything else to worry about.  The learning curve is nice and shallow as far as using the controller is concerned.  In addition to the drums, there is a microphone in the DK Bongos, which is used to detect claps during gameplay.  Hit and drum, and clap; that's it, and really, that's all you need to have a great time. 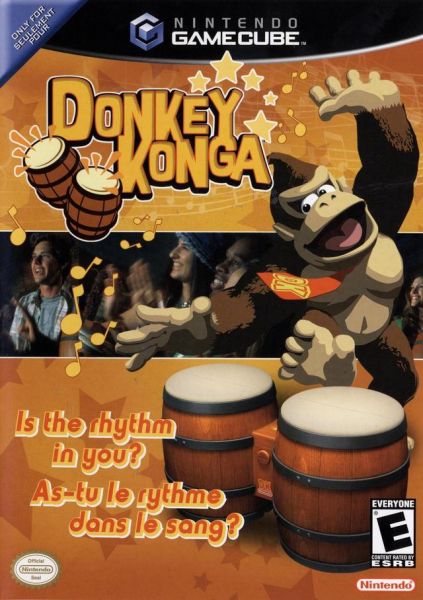 Gameplay is quite simple, too.  Symbols float by on your screen, from right to left.  When the symbols cross the line, you perform an action.  Left drum, right drum, both drums, and clap are all represented by separate icons.  If you time it right, you'll hear the appropriate sound and earn points.

As far as the co-op goes, Donkey Konga does quite well.  Two players can play in story mode together.  But the most fun is playing with four at once.  All of the parts for each player are different, and when you all work together in tandem, it sounds great.  There's a sense of unity to playing a song together in Donkey Konga that reminds me of that in Rock Band.  The best part though, is that your dear grandma, or even a very young child can handle Donkey Konga where the other, more modern music games would likely be pretty intimidating.  My youngest kid was three years old when the game came out, and even he was able to play along and have fun. 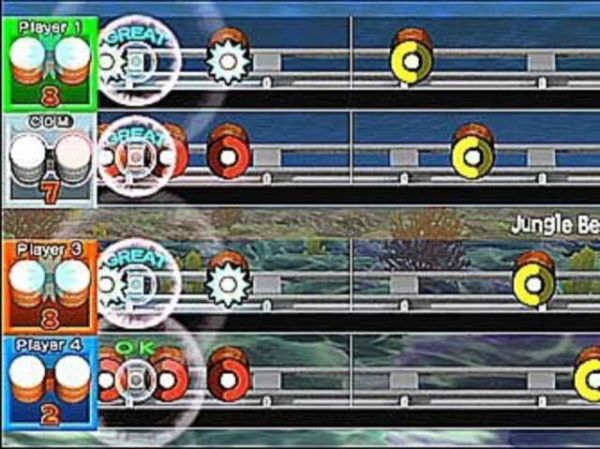 Another aspect of the game that makes it casual friendly is the huge range of music featured.  Those who already play video games will recognize your expected Zelda, Mario, and Donkey Kong themes.  For the younger set, there's the Pokemon song, and Bingo (yeah, that one... B-I-N-G-*clap*).  Older folks will recognize "Louie, Louie" and "You Can't Hurry Love".  A few classical tunes plus more recent bands like Blink 182 round out asetlist that literally has something for everyone.

Being a Gamecube title, Donkey Konga is compatible with the Wii.  There was a sequel, too, so finding one of the two games to try wouldn't be too tough or expensive at this point.  The DK Bongos would likely be the hardest thing to track down, though I recall seeing them at Toys R Us as recently as last year.  If you enjoy music games like Rock Band, and are looking for the best "entry level" rhythm game for non gaming friends and family, I highly recommend Donkey Konga.