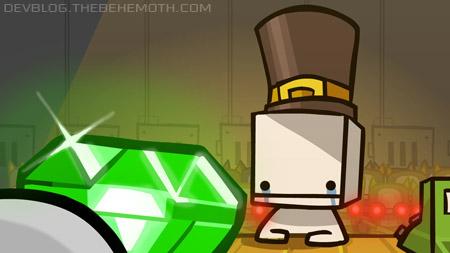 The Behemoth, makers of the ridiculously awesome four player co-op Castle Crashers, have announced that they are announcing their new game; aptly titled Game #3 on March 18th.  Got that?  The developers are announcing and announcement which is actually a video of a game that's yet to be announced.

The only thing revealed so far is the above piece of artwork.  There's not much to grasp from it - glowing red eyes from an army of some strange creature adore the background, while the foreground shows someone attempting to purchase, or perhaps pawn, and emerald.  And is Mr. Top Hat crying there?  Perhaps tears of joy for co-op.