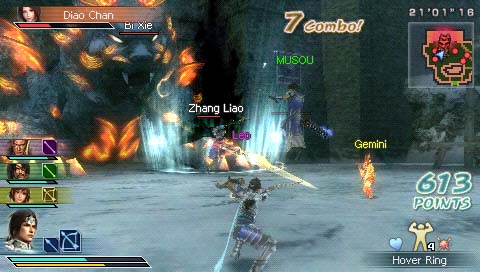 Koei has announced that their four player co-op version of Dynasty Warriors called Dynasty Warriors Strikeforce will be released in North America on April 28th.  Europeans will get their hands on the PlayStation Portable game on May 1st.

Stirkeforce looks to play out like an Action/RPG similar to Phantasy Star Portable in which players meet up to form party and then go out and quest, defeating enemies and earning items and upgrades.  One of these upgrades are new Fury powers which allow supernatural abilities like flying and lightning speed.  The biggest addition though, are gigantic end bosses that require teamwork from all four players.

We've posted a handful of new screenshots from the game.