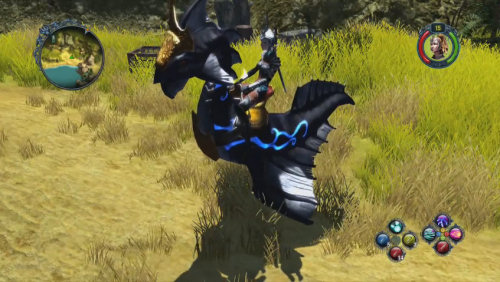 The world of Sacred 2: Fallen Angel is big.  How big?  It would take players six hours traveling on foot to cross it.  Holy kobold butt!  That's a big game world, one in which you can enter with four friends in co-op fashion as a matter a fact.

Thankfully there's some pretty slick options for you and your friends for getting across said map, and aside from some portals and other quick methods you can ride on virtual ponies!  PONIES!  Ok, so that thing above doesn't really look like a pony, but I assure you that the Wind Serpent is a pony at heart.  This special mount is only available to the High Elf character class.

We've got a short video of the mount in action as it absolutely annihilates anything in front of it.  Apparently they didn't give the serpent any carrots this morning.  Look for Sacred 2: Fallen Angels to hit the Xbox 360 and PlayStation 3 later this month.  Looks like the game is delayed until May.