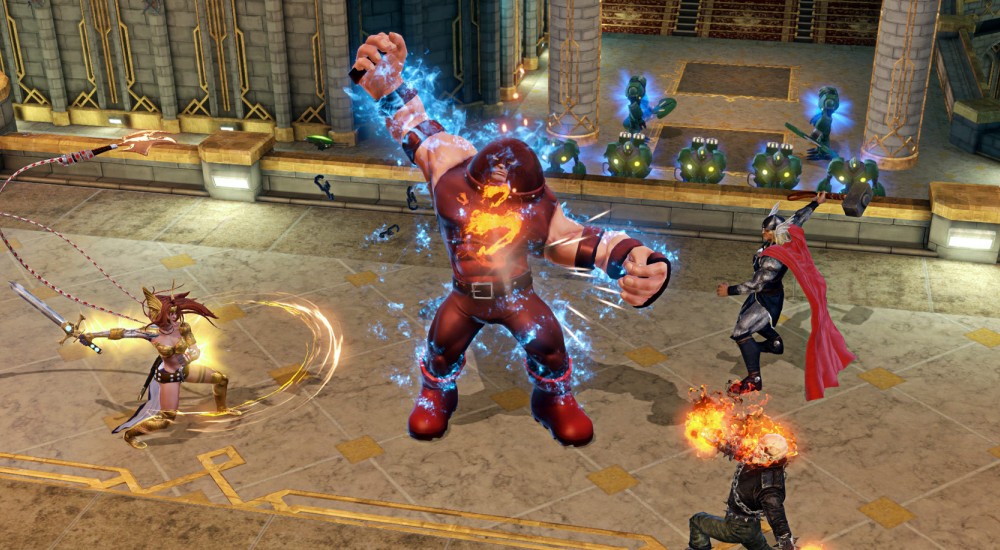 Gazillion kicked off the closed beta for Marvel Heroes Omega last Friday. "Closed," in this case, means that in order to get into the beta, you have to buy one of the six Founder's Packs, which range in price from $20 to $60. They also revealed a particularly nice feature that aligns with our interests: local co-op.

I bought into the closed beta so I could check it out over the weekend. Coming from the PC version, it's rather interesting to see what's different. The game as a whole feels more streamlined, which I suppose is to be expected as Gaz is focusing on the "core" elements of the title for now. I've yet to level a character to 60 to see what the end game content is like, but with only one patrol zone and no weekly in-game events yet, I don't expect there to be very much for now. There are a lot of little changes from the PC to console, such as changing up hero synergies and the bonuses certain gear grants you, but none of that is necessarily a bad thing. In fact, some changes, such as the in-game currencies being reduced to just three (one for buying heroes, one for buying items from vendors, and one that only becomes available at 60 for buying special items), means that the title is easier to approach for newcomers.

The inclusion of local co-op is also great, though it's worth noting that both players need to have a PSN account (you don't need a PS+ account for both) and that everything is tied to the first player's account in the game. This means that no "Guest" accounts are allowed for playing local co-op. It also means that the second player can only access the heroes that the first player has unlocked and any gear/experience the second player earns all gets saved to the first player's account.

That last point is important, so I'm going to reiterate it. Don't buy Founder's Packs on two different PS+ accounts if you want to play together locally. The second player only has access to the first player's account when playing locally. It sounds like Gaz may be looking into opening that up so both players can access their individual accounts if they both have PS+, but I don't think that's going to happen anytime soon.

The closed beta on the PlayStation 4 will end on May 15, 2017, and presumably an open beta will kick off sometime after that. There will be a closed beta for the Xbox One version as well, but no news just yet on when that will happen.