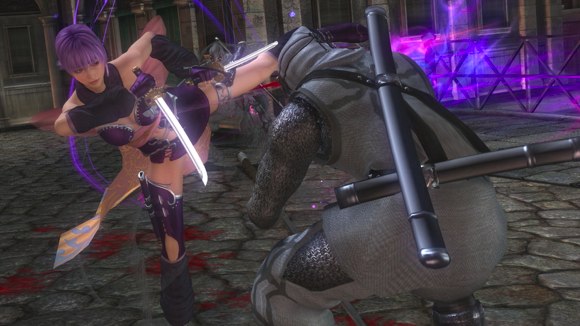 At this week's Game Developers Conference in San Francisco, Team Ninja has announced that the upcoming port of Ninja Gaiden 2 for the PS3 would contain a handful of new characters as well as a unique co-op mode.

The first character Ayane, the purple-haired ninja from Dead or Alive, and she'll be performing her own unique moves, weapons, and magical attacks. The second new character is Momiji, from the Nintendo DS game Ninja Gaiden Dragon Sword.

Both these characters will be playable along with Hayabusa in the game's online co-op mode.  While the mode isn't through the game's story, it is a scoring based Ninja attack mode through thirty different stages and four difficulty levels.  I don't think you and your friends are going to get bored of that anytime soon!

Other tweaks for the PlayStation 3 version include "smoother and sleeker presentation" and more refined levels.   You'll also find trophy and six-axis support, as well as enhanced graphics.  All in all Team Ninja claims there is 30% more content here.  I guess we'll see later this year when the game launches on the PS3.