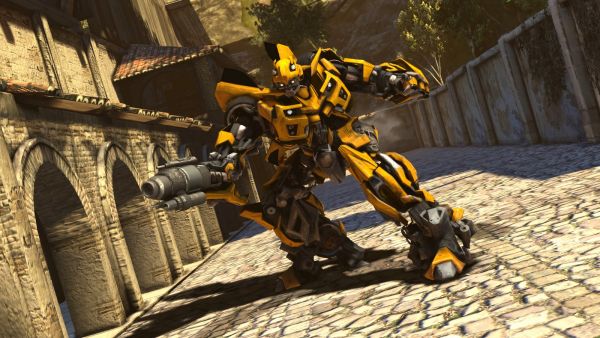 For the third year in a row, fans of giant robots who change into cool vehicles will be getting a Transformers-based video game.  Summer 2011 brings the third Transformers film, Dark of the Moon, to theaters, and of course there is the obligatory game tie-in with it.  The past two movie games were horrid and average, respectively, and we are hopeful that the trend at improvement will continue.  What makes us so hopeful?  First of all, the game is being developed by High Moon Studios, who did a bang-up job on War for Cybertron last summer.  You may recall that in addition to a highly regarded online vs. component, online campaign co-op for three robots and a five-player survival mode called Escalation were included.

Of course, just because High Moon's previous Transformers title had co-op doesn't prove that the movie tie-in will.  According to the press release, "fans can play the game with or against their friends through intense, online multiplayer game modes".  Sounds like Escalation, at the very least, will be making a return.  The trailer, embedded below, shows off a couple new models as well as the new "Stealth Force" gimmick.  Said gimmick apparently means being in vehicle mode with most of robot mode's weapons hanging out.  That's stealthy, right?  Expect the Dark of the Moon game to hit in June, shortly before the movie's arrival.