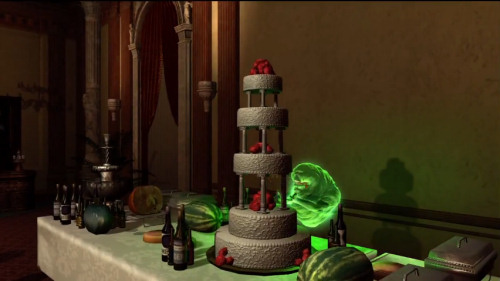 Hola!  Are you ready to bust some ghosts?  After watching six minutes of leaked gameplay footage from the upcoming Xbox 360 version of Ghostbusters I sure am!  Apparently someone snagged a some footage of the upcoming demo of Ghostbusters from Microsoft's PartnerNET, the developer and press version of Xbox Live.   Sadly there's no co-op play on display here.

The video is taken from the Spanish version of the game, but features an odd mix of Spanish dialog and English dialog along with Spanish subtitles.  Needless to say you'll be learning Spanish a lot faster than you ever did in high school if they taught it with this game.

Check it out as as the boys battle Slimer in the hotel ballroom causing massive damage to everything in their path, and eventually bagging the ghost.   Es fantastico, simplemente no cruzar los arroyos!