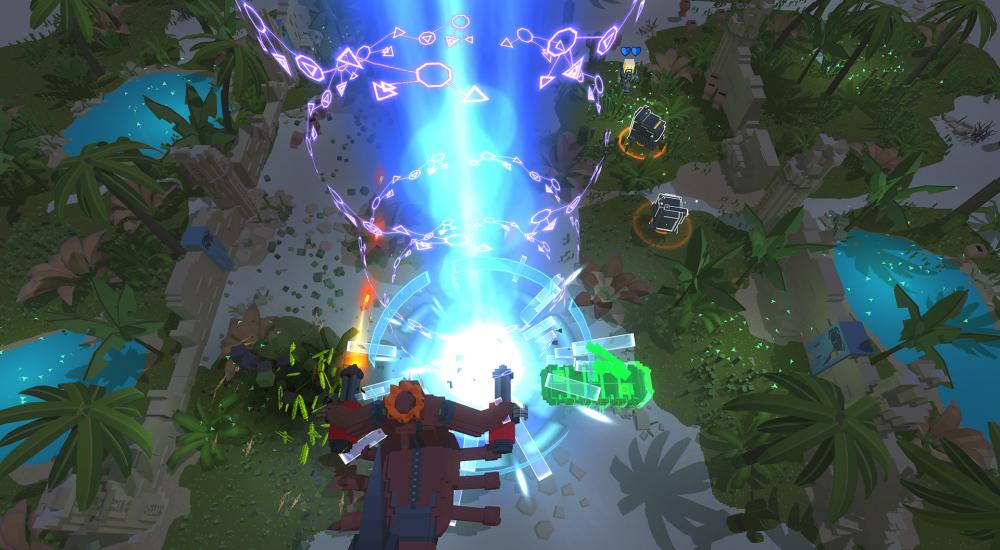 A new game snuck on Steam and Xbox One recently set in the Serious Sam universe and loaded with characters from Devolver Digital's games lineup like Hotline Miami, BroForce, Shadow Warrior and more. Called I Hate Running Backwards, the new title is from Binx Interactive - a member of Croteam's Incubator indie developer program.

The game features voxel style graphics which help feed into the explosive and destructive environments. You'll take on familiar enemies from that series in randomly generated never ending levels. The game plays like a traditional shoot em up, with one unique twist, you're facing down while the game scrolls up. This "running backwards" mechanic adds a twist as you'll have to be on the lookout for obstacles like walls, pillars, and crates - either navigating around our using a melee attack to break through.

There are a dozen or so characters to unlock and play as, with each one offering unique weapons and abilities - whether it's more health, speed, or faster cooldowns - each character feels slightly different as you attempt to survive as long as possible.

The game's two player couch co-op mode allows you to bring a friend along, and while the difficulty doesn't appear to increase, the ammo drops do. This is a good thing as you'll be going through a lot of ammo fighting off headless bombers, charging skeletons, and giant scorpions. There's a cool down timer when players die before your co-op buddy can respawn in, and when both players are out, it's game over.

The boss battles in the game are incredibly difficult, and with limited health, you're run will likely end at each one of these until you get a good chance to figure out the gimmick. Most involve using your melee attack to deflect bullets or dodge. There's a few layers of strategy built in to the game that's not apparent at first (like breaking down side walls to find powerups) - but overall it's a pretty straight forward affair.

Overall this I Hate Running Backwards is a fun little game with a unique take on the classic SHMUP genre. It feels a bit imbalanced at this time, but there's already been a few patches to tweak characters and difficulty levels.  It's out now on Steam and Xbox One for $14.99.