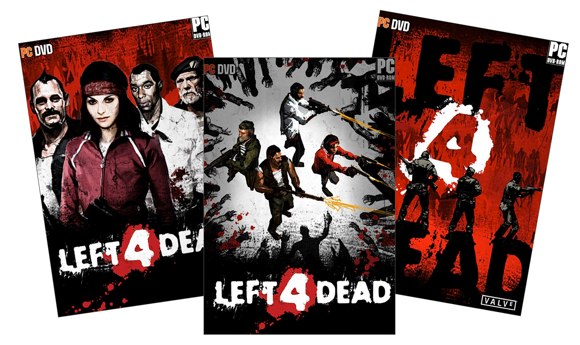 We never quite covered box art like we did for Left 4 Dead with any other game.  Whether it was German censoring or hand puns, we felt the need to tell the world about the box art for this four player co-op title.  Now several months later, as Valve gears of for some DLC, they've revealed the original evolution of the box art.

We were a bit surprised to see the familiar hand was no where to be found in any of the original mock-ups; and in fact the coloring was completely different.  Jeremy Bennet, the artist for Valve in charge of making these, explains why the shift went from a focus on the characters to something slightly different in the latest blog post.

Our first designs focused on Bill, Louis, Francis and Zoey, the four lead characters that players would be guiding through Left 4 Dead's post-apocalyptic zombie wasteland. Right away this presented problems.

Typically, for a video game (or DVD or book) cover to be eye-catching, there'll be a single prominent element front and center—our "hero" character, for example, with ancillary characters standing around in the background:

With a cooperative title there isn't a central character.  So focus shifted to making the characters balanced, which made them get lost on the big box art due to the size.  Slowly you'll see the evolution to the type face approach with a prominent character - the hand.  Of course there was a problem with that as well.

But as it turned out, it still wasn't perfect—the final piece of the puzzle would actually arrive from a helpful fan. We had by this point shown off the new branding at E3, and it had only taken one fan about three seconds to point out that if we used a four-fingered left hand instead of a right hand, we could get a nice pun, with all three words of the game's title presented visually. Next up we wanted to share some fan made photographs of Left 4 Dead, actually called Left 5 Dead.  These HDR shots recreate scenes from the game with real life models.  I gotta say, the Bill is spot on.

Be sure to check out the full gallery here at the user's Flickr photo stream.  I'm not sure about the weird pirate dude, but the rest are very well done.