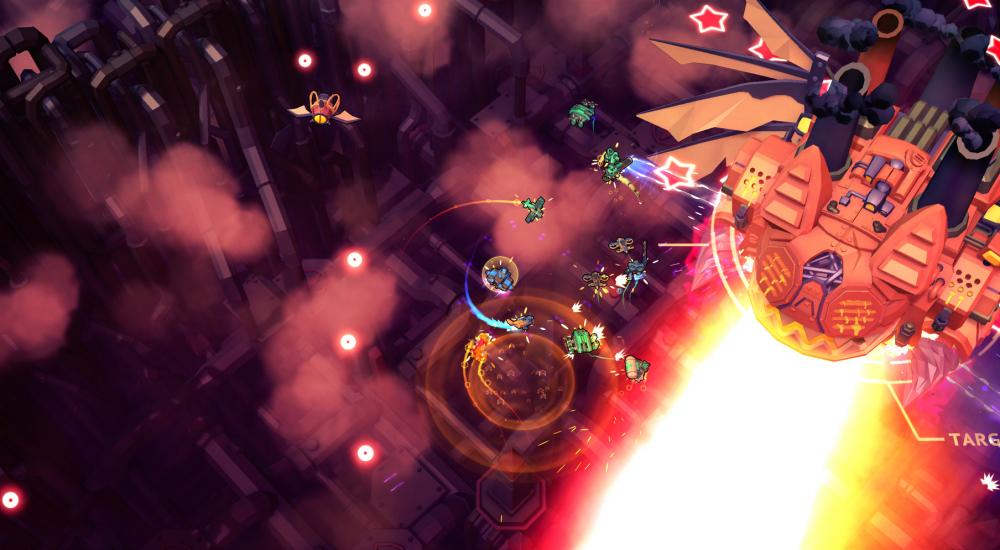 Steambirds Alliance is one of those co-op games that is on the cusp of doing something new. It's not quite a co-op game in the traditional sense, it's an "open world" MMO twin-stick shooter that is completely PvE. But there's no partying up, there's no level cap, and there's certainly no shortage of green space ships. Did I mention it's a rogue-like too?

The game was released last Friday and so far, it seems to be quite popular. In fact, the servers feel so crowded it seems to affect performance. Case in point. You'll pick a ship, head out on a mission to destroy X amount of enemies or collect Y amount of dog poop (yes, that's a thing) - from there you'll earn upgrades and items for your ship. The game will auto-equip the best items for you, quickly filling your inventory with junk. No worries, there's a dedicated button to dump it all.

There are instanced "dungeons" to take on bosses and complete smaller tactical type missions on your endless quest for better loot. You can level your ship up by gaining XP, but if you die, that all goes kaput.

Back in the hub world you can spend that XP on permanent upgrades for your ship, unlock new ships, and continue on the endless cycle of getting more loot, xp, and upgrading. Missions are doled out on timed basis based on your level and it's pretty clear cut what the risk/reward scenario is.

Still, everything feels a bit rough. There's a certain lack of polish with Steambirds Alliance. The inability to actually squadron up with friends on missions feels almost inexcusable and disjointed. The mechanic that allows you to teleport to anyone is nice, but it's almost too accessible and I found myself accidently teleporting to a random player in the heat of battle. And the performance needs to be smooth for a twin stick bullet hell like this, and it's just inconsistent.

Don't get me wrong, I think we all agreed there is potential here - these birds just quite aren't ready to leave the nest. Steambirds Alliance will be one to watch for in the coming months, just let us know if we should continue to do so.