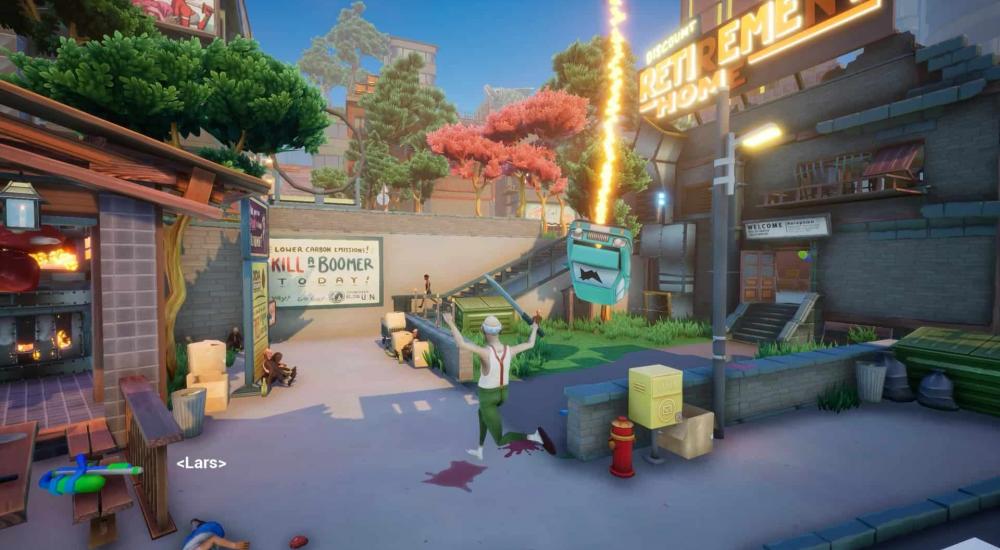 Being a millenial, I can safely say that millenials are occasionally... annoying.  That said, we're not quite as horrid as our virtual counterparts in Just Die Already, which presents a world where pensions can no longer be paid due to millenial laziness (and presumably our crippling avocado toast addiction).

In the game, you play as an elderly person who has just been booted from your retirement home and left to fend for yourself.  Retirement care is still reachable, but not before you acquire "retirement tickets" by completing dangerous challenges and exploring a vast, sandbox world.  That's pretty much all the context you'll get (or need) before diving into the physics-based platforming and puzzle solving.  Be careful, though.  In case it wasn't abundantly clear, you're an old person, and just about any activity has a chance to hurt you in one way or another.

Just Die Already comes to us from the designers of the esteemed chaos generator known as Goat Simulator.  Naturally, you can expect things to get pretty wacky as you work to obtain the aforementioned tickets.  If the game's Steam page is anything to go by, you'll be flying around with jetpacks, casting spells, and getting thoroughly electrocuted before all is said and done.

You'll get to cause as much wanton, elderly destruction as you'd like when Just Die Already arrives on PC later this summer.  Thankfully, it offers online co-op for up to four players, which means you and three friends can explore the entire sandbox together (and even work towards a common goal, if you so choose).  Who knows, maybe you'll all make it back to retirement?