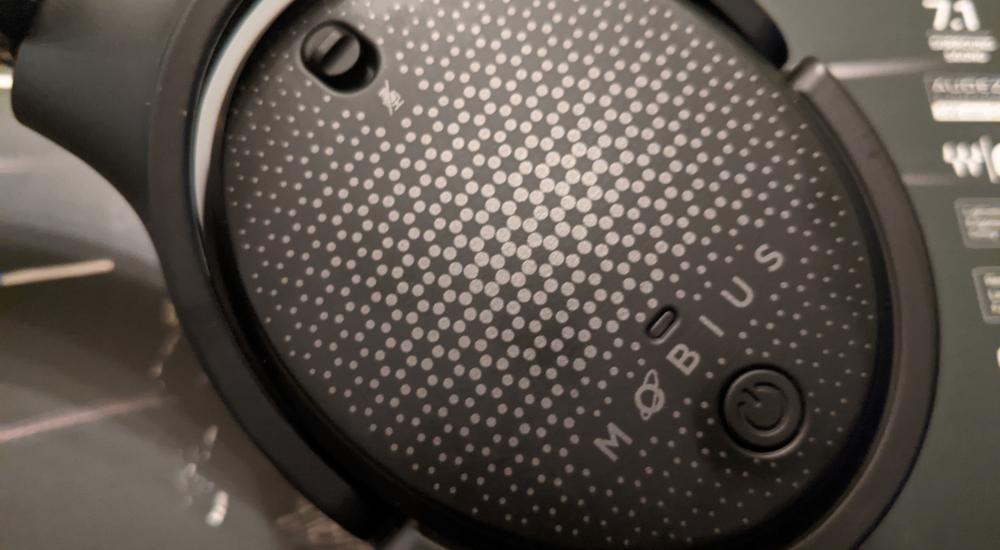 Audeze may not be a name that many folks recognize in gaming hardware circles, certainly not as common as SteelSeries or Razer. But Audeze has been around for a number of years producing high end planar magnetic driver headsets for audiophiles and now they are dipping into the gaming market with some pretty slick features just for gaming immersion. Enter the Audeze Mobius.

Most traditional headsets use dynamic drivers requiring some sort of material and a magnetic coil to generate soundwaves. Planar magnetic sets are slightly different.  Instead of having a magnet and coil that amplifies some material, magnets sit in front of and behind this film and thin wires go through the material. This in turn makes the film magnetic and the magnets in front and behind the film are then capable of moving it back and forth to produce sound. Similar concept, different execution.

The Audeze Mobius are powered by Audeze Planar Magnetic drivers and the DSP (digital sound processor) was created in partnership with Waves. The headset is capable of processing 5.1 and 7.1 surround sound audio with head tracking and room emulation. What does that mean? Imagine if you were sitting in front of a giant stage with huge speakers, now turn your head to the right. The sound would change slightly, with your left ear taking in more of the volume while your right is now catching the reflections of that sound. It's something very subtle, but the level of immersion it adds can't be understated. My Audeze Mobius unit came in all black and it was immediately apparent upon opening the packaging that the headset has a really solid build quality. There's a soft leather like coating over the entire plastic and metal construction giving it a premium feel. The cushions on the ear create a sound isolating seal while still being comfortable and the band at the top is equally "just right" for those long gaming sessions.

While the Audeze Mobius is billed as a wireless headset, unfortunately the above sound modes are limited to 2 channel stereo when in wireless bluetooth mode. For this, I was extremely disappointed. The 3D Headset tracking still functions, but you lose the hi-res capability or simulated surround. This means you'll be cabled up with a USB-C connection - and unfortunately the cable that's included is very cumbersome.

I put the Mobius through a variety of paces including several hi-resolution tracks on AmazonHD Music (Join Amazon Prime Music - 30-day Free Trial) and a good variety of recent titles for gaming like Sea of Thieves, Iron Harvest, Serious Sam 4, Halo: The Master Chief Collection, and Marvel's Avengers. The one thing that's common across all content is the stage presence with the headset. It's big, loud and full. That said you never lose the crisp highs at the sacrifice of midrange or bass. Listening to "The Machines EP" by We Are All Astronauts is a really good exercise in complex and sweeping music and comparing it to my SteelSeries Arctis Pros in HD mode the Audeze were a significant step up in overall range. The best way to describe it is like HDR for video - the brights (highs) are brighter and the darks (lows) are darker. They both sounded great but you experience more of the song with the Audeze.

Diving into games the head tracking adds this level of accuracy to the sound that gives you pin point accuracy to position. When characters talked behind me in Serious Sam 4 I literally turned my head to listen to them and then sound quickly shifted to being in front.  Details popped out in sound effects like wood splintering in Sea of Thieves or bullet casings dropping in Iron Harvest. Needless to say the Mobius is perfectly capable of fully immersing you in the gaming experience.

Outside of the cable situation I was a bit disappointed in the microphone and the balancing capabilities with said mic between voice and in game audio. It left a lot to be desired coming from the SteelSeries Arctis Pro's. Of course the biggest downside is the price - at $399.99 these are definitely at the very upper end of gaming headsets, but are actually on par with most planar magnetic driver headsets audiophiles have come to love. There's a distinct market for the Audeze Mobius and if you've got the budget to cover it - I still recommend you give them a listen.