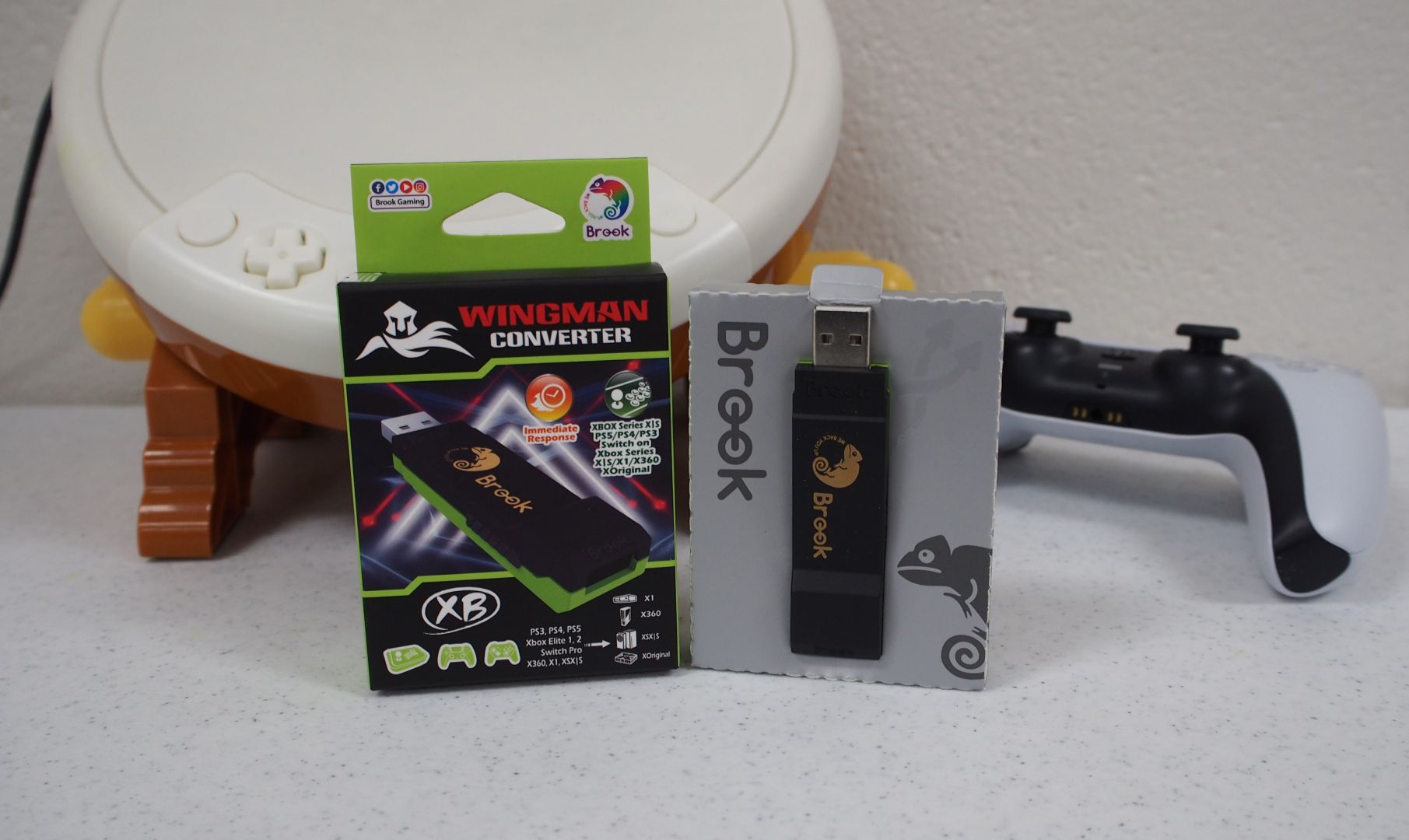 There are lots of reasons to love Xbox as a platform: the power of the Series X, the affordability of Series S, the huge library of Game Pass, and more. What if you have an Xbox but prefer the PlayStation DualSense controller, though? What about that arcade stick for Switch you have lying around, or a PlayStation Taiko no Tatsujin drum controller – must they go to waste? Not at all! The simple solution is to get a Brook Wingman XB converter for Xbox. This relatively inexpensive accessory lets players use controllers from PlayStation, Switch, and more on an Xbox Series S|X, Xbox One, or Xbox 360 console via both USB and Bluetooth.

Here are a few of the controllers that can be used on Xbox 360, Xbox One, and Xbox Series S|X using the Brook Wingman XB. See the Brook website for further compatibility listings.

The Wingman XB is a small USB accessory about 8 cm long. The male USB end plugs into an Xbox or PC; the female USB port on the other end allows numerous USB controllers to be connected. The device also has two large buttons on its sides that are used both to update the firmware and as LED indicators. The blue or red colored lights indicate whether a controller is connected, turbo mode is activated, or button remapping is activated.

Speaking of updating the firmware, that’s the first thing a user will want to do upon buying the Wingman XB. Out of the box, the device reportedly suffers from latency issues that will go away after a firmware update. Updating the firmware also increases compatibility with various devices such as Taiko no Tatsujin drum controllers for Switch and PlayStation. Updating the firmware is an easy process: simply download and launch the program on PC or Mac, squeeze the buttons on the side when connecting the Wingman XB, and then let the updater do its work. Gamers who don’t own a PC or Mac will be out of luck or forced to ask a friend for help; otherwise, it’s a painless procedure. To use a supported USB controller, simply plug it into the Wingman XB and then connect it to the Xbox console. The device’s LEDs will blink for a few seconds while it detects the controller and then remain lit when it’s ready to use. If the non-Xbox controller is a DualShock, DualSense, or Switch Pro Controller, you can even disconnect the cable after the controller has been detected and play wirelessly! The Wingman XB has built-in Bluetooth support, allowing those specific controllers to go wireless with Xbox.

Using the Wingman XB, I played a variety of Xbox games with non-Xbox controllers. The PlayStation DualSense and Switch Pro Controller worked flawlessly, with each button performing the expected equivalent action of an Xbox controller. There's no detectable latency; everything just feels right. I also tried an Astro City Mini Gamepad. That controller only has a total of 8 buttons, several less than an Xbox controller. Thankfully, when using such a controller, players can use specific button combinations (listed on the Wingman XB product page) to act as the missing buttons. As mentioned earlier, the Wingman XB also supports turbo and button remapping functions. Both features can be used with any Xbox buttons other than View, Guide, and Start. That means you can even remap or add turbo to the triggers and the left stick and right stick buttons. To initiate turbo or remapping, just press either View plus Guide or Menu plus Guide. The LEDs will change color to indicate the device is in programming mode. After a few more button presses to set the features to specific buttons, you’re all set. Note that the turbo feature (very useful for games like Shantae and the Seven Sirens) still requires the player to press and hold a button during use; the Wingman XB doesn’t support hands-free auto-fire.

Last, but not least, we come to the reason for which I’ve been most excited for the Wingman XB: Taiko no Tatsujin drum compatibility! Taiko no Tatsujin: The Drum Master launched on Xbox a few months ago, but Bandai Namco and Hori haven’t released an Xbox controller as of this writing. The Wingman XB lets players buy a Switch (still in production) or PlayStation 4 drum controller (no longer in production) and use it on Xbox. This requires the creation of a specific controller profile in the Xbox system settings – see the walkthrough video. Players also have to set the control type to type B in the game itself for the drum to function properly, which the video fails to mention. Still, once the setup is completed, the drum works like a charm! Using a drum definitely makes Taiko no Tatsujin even more enjoyable to play. Brook should really find a way to have the drums work without the need for a separate controller profile, but it’s a small price to play for arcade-style Taiko action.

The Brook Wingman XB is an extremely useful accessory. Being able to use controllers and other accessories from different platforms on Xbox is both convenient and fun. Even when playing with a regular Xbox controller, the turbo feature can come in handy. If you’re an Xbox gamer who owns arcade sticks, drum controllers, or other expensive controllers for PlayStation or Switch, the Brook Wingman XB is an affordable way to get more use out of them. Let’s hope Brook continues to add compatibility with even more controllers such as the ones for the Taito Egret II Mini!

Get the Brook Wingman XB for $45 at Amazon.

A sample unit was provided by the manufacturer for this review.