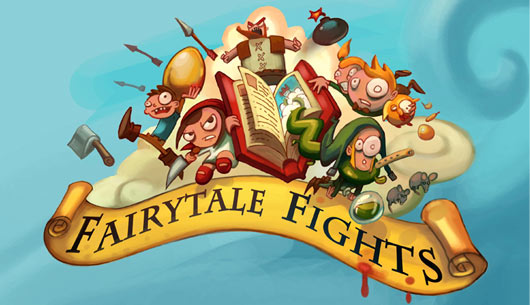 It would be cliché of me to say I adore Fairytales, simply because I'm female. So, in order to balance that stereotype, I'll be encouraging the general abuse of Fairytale characters and woodland creatures in Fairytale Fights with enthusiasm. Playlogic Entertainment, Inc announced the Hack and Slash style Fairtytale Fights, where players don the role of their favorite Fairytale character to bloody up some bad guys.

"Fairytale Fights is a truly twisted hack’n’slash platform adventure where players assume the role of a much-loved fairytale character, whose glory days have long since passed. While embarking on a seemingly innocent journey to save a colorful fantasy world from certain disaster, players traverse a series of colourful and enthralling levels filled to the brim with action-packed combat and fairytale-style storylines. Luckily, many different weapons lay strewn throughout the fairytale kingdom, which players can use to slice and dice their way through swathes of cute fluffy bunnies and imposing enemies."

Fe-fi-fo-fum, I smell the blood of some awesome fun. Fairytale Fights features the "volumetric liquid system" to give us realistic blood or water, and the help of Unreal 3 engine I see great things in store for us. We're talking both beauty and grace here, with a hint of twisted humor to kick it up a notch. I don't think we're in Disneyland anymore.

Co-optimus.com predicts a bit of a Marvel: Ultimate Alliance style game, with the humor and depth of Grimms fairy tales. Talk about an intriguing original concept! Local and online co-op have both been confirmed, as well as the drop-in/drop-out feature we all love. The Big Bad Wolf better watch out, Red Riding Hood won't be so helpless this time around.

“Fairytale Fights is the creative brainchild of our talented development team at Playlogic Game Factory and that’s why we wanted it to be the first next-gen title that Playlogic is building in-house from the ground up,” said Rogier Smit, executive vice president for Playlogic. “The game combines a truly unique storyline and fantasy environment with simple intuitive controls to offer players a whole new level of bloody slice-and-dice gaming."

Fairytale Fights is on the slab for a Holiday release on the Xbox 360, Playstation 3, and PC.