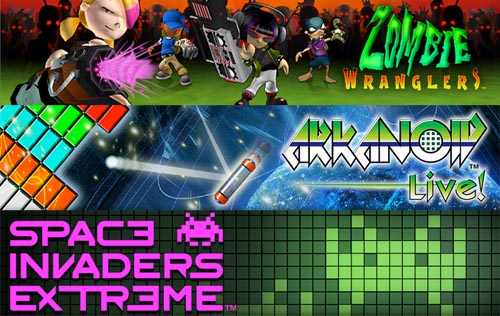 After a few disappointing and expensive weeks in a row on Xbox Live Arcade, Microsoft is coming back in a big way for co-op fans.  We have not one, not two, but three cooperative titles hitting the Xbox Live Arcade this Wednesday, May 6th.  All three titles will cost you 800

First up is the game we recently did an interview for, Space Invaders Extreme.  It features four player local and online co-op modes, thumpin beats, and classic remixed gameplay.

Next up is Arkanoid Live, another remixed classic.  The game features two player local and online co-op modes as well as updated visuals and levels for all your block busting goodness.

Finally we have Zombie Wranglers, a game we rumored to be released last October.  The game features four player online and offline co-op as players work together to suck up zombies in this light hearted yet challenging arcade title.

Which titles will you be picking up?