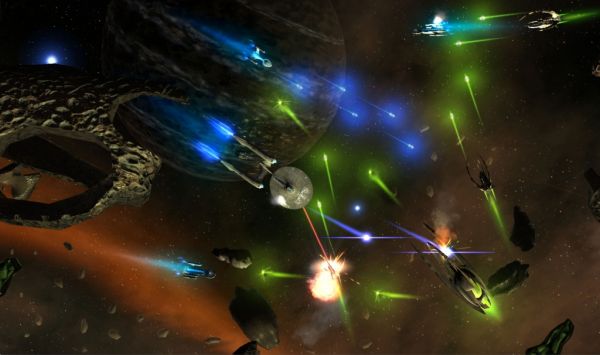 The new Star Trek movie hits theaters this week, and by all accounts, seems to be a sure fire summer blockbuster.  Paramount is hoping to cash in on that success with a downloadable game tie-in called Star Trek: D-A-C.

Today they've released the first trailer for the game which combines clips from the movie with action from the game.  There's enough lasers and photon torpedos here to keep even the biggest Star Trek fans at bay.  And the new screenshots confirm it further.

Sadly after seeing the latest screenshots and trailer I'm not too sure the cooperative modes in this game are anything more than skirmish style play with bots.  Hopefully the single player mode of the game has some sort of story integrated with it that allows players to work their way through.

We expect Star Trek D-A-C to hit XBLA next week, followed by the PlayStation Network and PC later this summer.