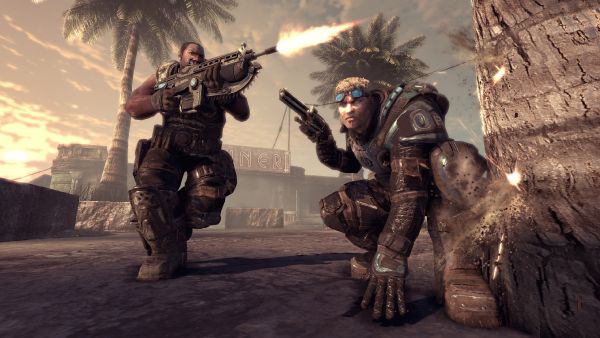 In an exciting move that will please hardcore fans but sting their wallets, Epic Games and Microsoft have announced that both previously available map packs for blockbuster title Gears of War 2 will be re-released in a retail package -- Gears of War 2: All Fronts.

Furthermore, seven new multiplayer maps and a campaign extension (titled Road to Ruin) will be included, as well as some cool swag and an introduction video by Epic's Cliff Bleszinski

It has not been determined if Road to Ruin will be playable in co-op, although it is confirmed that both Marcus and Dom will be present in gameplay. However, we fully expect the new multiplayer maps to be available in the five-player co-op favorite Horde Mode.

Click "Read More" for the full press release and a quick gallery to start the hype (Cole)train.

“Gears of War 2,” the entertainment blockbuster of 2008, has surpassed 5 million copies sold worldwide, and the overall “Gears of War” franchise unit sales have eclipsed the 11 million unit mark. The momentum doesn’t stop there – to commemorate these milestones, Microsoft Game Studios and Epic Games will unleash the “Gears of War 2: All Fronts Collection,” a value-packed compilation that combines all previous “Gears of War 2” Game Add-ons with brand new multiplayer and campaign content. Available only at retail, the new collection invades store shelves worldwide on July 28 for $19.99/£14.99/€19.99.

The seven new multiplayer maps in the “Gears of War 2: Dark Corners” Game Add-on are:

Already enjoying the previously released “Gears of War 2” collection of map packs? Available day-and-date with “Gears of War 2: All Fronts Collection” via download from Xbox LIVE Marketplace, the “Dark Corners” Game Add-on will be available separately for 1,600 MS Points.