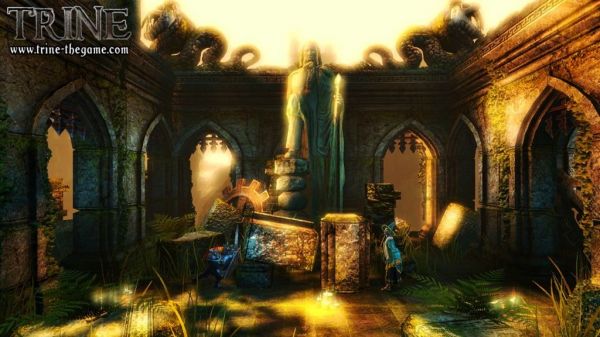 PlayStation 3 and PC owners will be treated later this year to a truly unique title coming from developer Frozenbyte.  The game is called Trine, and its a fantasy based puzzle platformer.  All the puzzles in the game rely on real work physics.  Players take control of three characters: the wizard, the thief and the warrior.

While it may sound like Gauntlet, each character has their own unique abilities that help solve the environmental puzzles.  In single player you are able to switch between these characters.  Where the game shines though is a three player co-op mode that allows each player to control one of the characters.

Joystiq had some hands on time with the title and did nothing short of gush.

The first level is filled with various puzzles and undead enemies to slash through. Players must simply go from the left to the right, but the level is filled with a surprising amount of verticality and depth. There are many ways to traversing the level. You could use the thief to swing across a gap, or use the wizard to create a makeshift bridge. There was a tricky platforming path we avoided altogether by creating a block and jamming it in a gear, opening up a new path that was previously inaccessible.

From the screenshots and video we've seen the game is nothing short of gorgeous.  The music is incredibly standout and mood evoking.  This is one co-op game that looks like it should be on everyone's radar.