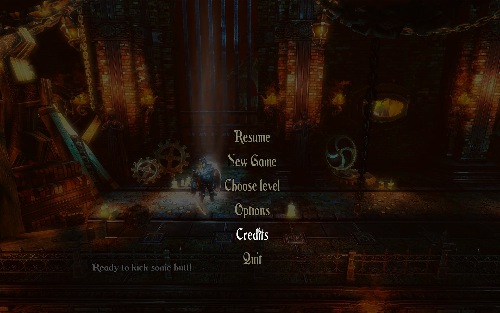 As I worked my way through Trine, I became deeply engrossed in the game.  I never found it very difficult, at least not the combat, but felt challenged enough to enjoy it.  I'm not one to cheat in games, but I accidently discovered a cheat code in Trine that not only partially ruined the experience for me, it made the game crash!

When I activate the cheat, I saw the above screen with a message - "Ready to kick some butt!" as well as a tone.  I thought to myself, what did I just do?

I'm honestly not sure how many people can replicate this, but I do know of at least one requirement.  You'll need a keyboard that has some sort of volume control software running behind it and a hotkey to control the volume.  Hitting volume up or volume down on my M17x yielded the cheat, and suddenly my characters stats were maxed and I unlocked every item in the game.  Repeatedly hitting the volume control eventually caused explosions in the game world and then caused the game to crash.

I was very disappointed because, as I said above, I felt this cheapened my experience and it ruined my saved file in the process with the maxed out one.  It appears I'm not alone as well, as posts popped up on the official forums with the issue.  A Frozenbyte member responded and claimed a patch would be coming, but that was just over a week ago.

So the moral of the story?  Don't adjust the volume with your hotkeys if you don't want to ruin the game.  If you want to cheat?  Volume up!